SALT LAKE CITY — Sam Gonzalez was 9 years old in February when he and his friends found a gun buried in the ice and immediately alerted their school bus driver, who called police.

He said it was the “Scouts and a lot of movies” that taught him guns “can kill people and we shouldn’t touch them.” Officials say his actions prevented a potentially dangerous situation and are using the story as an example of what gun safety should look like.

“When those boys found that pistol in the snow and did everything right, we knew that the project had to take a different approach and a positive approach,” he said.

The event, which launched an educational video intended for grades 5-12, comes one day after a West High School student was apprehended for bringing a gun to school.

Though Reyes said the timing was coincidental and the event scheduled weeks ago, he noted that the West High incident offered another positive example of gun safety.

“Students reported the threat and school officials were able to defuse that situation without injury,” he said.

Kalkomey Enterprises won a bid for the production which ended up costing $70,000 out of the $75,000 set aside by lawmakers in 2016 through a firearm safety bill. Along with lesson plans, the video will now be made available to parents and schools across the state.

Reyes said the program will not be mandatory for school boards across the state, but he hopes all school will take advantage of the option.

“We all want to stop accidental shootings,” Reyes said, noting the video is meant to provide the education needed to “keep kids safe.” Pointing out that gun safety is a “highly politicized” topic these days, he said the educational campaign was bipartisan and did not take a political approach to the issue. 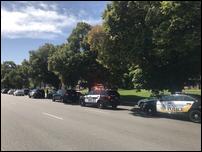 Police: 1 in custody after police investigate report of weapon at West High School

One person is in custody after police investigated a report of a weapon at West High School Wednesday, authorities said.

Though the video stated 42% of Utah households own guns, Will Fowlke at the Attorney General’s Training Center said the number is actually 46% (based on a 2017 Hinckley Institute of Politics-Salt Lake Tribune poll) and the video will be corrected “at the first opportunity.”

Officials at the event touted the importance of education, not just for families who own guns, but also for their friends.

Officials at the event noted that 42% of Utah households own guns and touted the importance of education not just for families who own guns, but also for their friends.

“We have thousands of parents and thousands of children in Utah who use guns responsibly, and grow up around guns, and know how to use guns,” said Sen Todd Weiler, R-Woods Cross, who sponsored the gun safety bill.

He said the initiative for SB43 came from a concerned parent whose son came across a gun while at a friend’s house. The teen stopped his friend from picking it up and told him “you need to call your mom.”

This same scenario is portrayed in the instructional video, which pictures a group of teens who stumble across a rifle in the garage of a home where they are playing basketball. “Nobody touches the gun! Is your mom home?” says one of the teens in the video.

The video characterizes teens and children who react correctly to the threat of accidental gun violence as heroic. “Thank you for reporting that, you are a true hero,” a school official is pictured telling a student who reports the threat of a gun at school.

According to Katherine Rhodes, executive assistant at the Utah Attorney General’s office, during the 2018-19 school year the state prevented 245 verified planned school attacks. Prevention of violence, she said, was often thanks to the 318 tips that came in through the SafeUT app designed to allow students, parents and staff to reports threats of violence in Utah schools.