SALT LAKE CITY — The Utah Department of Agriculture and Food announced Friday it has chosen eight applicants that will be licensed to grow medical marijuana in the state.

"Half of the awardees already have existing businesses in Utah and the other half are out of state but have Utah ties. All grows will be located in Utah. Seven of the proposed sites are in rural areas and one is in an urban area," Kerry W. Gibson, commissioner of the Utah Department of Agriculture and Food, said in a statement.

The selection process took hundreds of hours as the committee reviewed 81 applications. The Utah Medical Cannabis Act allows for up to 10 licenses to be awarded.

"The decision to only award eight licenses was made to avoid an oversupply of product, while still maintaining a healthy diversity of cultivators for purposes of competition of product quality and patient pricing," Andrew Rigby, director of Medical Cannabis and Industrial Hemp Programs for the Utah Department of Agriculture and Food, said in the statement.

The final approval of the growers' licenses remained pending Friday until background checks and compliance with cannabis growers' rules are completed, officials said.

Standard Wellness Utah said it was "thrilled" to have been awarded one of the cultivation licenses. "We look forward to providing the highest quality, all natural, pesticide free medicinal cannabis products for Utah patients," said Brandon Lynaugh, spokesman for Ohio-based Standard Wellness, in a statement.

Other growers did not immediately respond to a request for comment, or efforts by KSL to reach them were unsuccessful.

Applicants for the limited number of cultivation licenses were required to have at least $250,000 set aside for potential issues that deal with running a business of that kind, Rigby said last month. 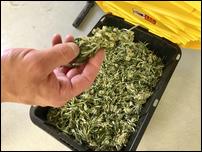 The wide metal barn on the Utah alfalfa farm owned by Russell and Diane Jones will host their youngest son's wedding next month. By September, they hope the structure will be full of marijuana plants.

A University of Utah study estimates Utah will have nearly 42,000 registered medical cannabis patients in the first four years of it being available.

Utah law dictates that indoor growers would be limited to 100,000 square feet of growing space, while outdoor farms could occupy up to 4 acres. Rigby said growers can plant anywhere from 1,500 to 3,000 plants per acre, depending upon the spacing used.

Utah voters approved a medical cannabis program via ballot Proposition 2 during last year's election, effective Dec. 1. But days after the new law took effect, the Utah Legislature replaced it with HB3001, a "compromise" law, during a special session.

The new law included significant changes on how medical marijuana could be legally recommended, sold and consumed. It removed a hotly contested provision allowing patients living a certain distance from a dispensary to grow up to six marijuana plants.

The Utah Patients Coalition, one of the state's most vocal groups in support of medical marijuana, issued a statement Friday saying it's "very excited that this milestone in Utah’s medical cannabis program was reached and are grateful to the regulators who have worked so quickly in the interest of patients.

"We’re thankful that so many applicants showed interest, and are hopeful that the new licensees will be able to quickly begin growing high quality, affordable medical cannabis for tens of thousands of sick Utahns who are eagerly waiting to use it to improve their health," the coalition said.

Correction: In a previous version of this story, the photo captions incorrectly identified the industrial hemp plants as marijuana plants.