The recent changes to the office’s website are in response to feedback received from students at the school after a viral Instagram account detailing students’ negative experiences with the Honor Code Office sparked outrage and protests. 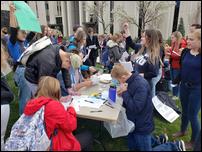 'This is all about love': BYU students sit in to protest Honor Code

BYU, a private university owned by The Church of Jesus Christ of Latter-day Saints, requires students to sign a code of conduct if they choose to attend the school. The Honor Code asks students to live by certain standards, including abstaining from alcohol, drugs, premarital sex and following dress and grooming standards.

Those who do not abide by the school’s code of conduct may self-report or be reported by another student or faculty member to the Honor Code Office. The office will then investigate the situation and determine if sanctions should be meted against the offender.

Many BYU students were concerned with the lack of transparency surrounding the investigation process. After listening to feedback from students, Honor Code Office director Kevin Utt announced that the office’s website would detail the entire process and clarify a few issues students say they weren’t sure about, including:

The website also explains other little-known details about the Honor Code process, including changes that were made in May following protests on school grounds. 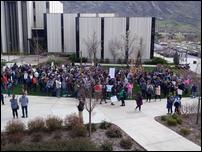 Following student criticism of the Honor Code office at BYU, the head of the program announced sweeping changes to the office’s policies on Tuesday.

While most processes detailed on the website simply clarify old policies that were unknown to students, Utt did announce one major change to the office’s practices.

Honor Code Office employees will now be called administrators, not counselors, “to reflect their role as student conduct professionals — and not therapists,” a news release from the school reads.

“When someone hears someone is a counselor, they assume they are licensed as a therapist,” Hollingshead said.

Honor Code Office employees are not licensed therapists, and the office wants to make sure there is no confusion with regards to their responsibilities. They can, however, refer students to the school’s Counseling and Psychological Services for mental health counseling if need be.

The office’s employees are now also required to undergo additional training with the Association for Student Conduct Administration — a national organization that develops and promotes best practices for universities. Employees were specifically trained on how to ask questions that are “sufficient and appropriate to the case and (that do) not go beyond the scope needed,” Utt said.

Many students had previously complained that the questions they were asked during an Honor Code investigation were inappropriate and unnecessary.

“I have taken seriously the charge to review each facet of Honor Code process,” Utt said in the news release. “The feedback from the students has been an essential component to this process, as it has provided a comprehensive perspective on the realities and perceptions of the Honor Code and the Honor Code Office.”

Students shouldn't expect the website to answer to all the complaints the office received, however. In May, a group called Restore Honor organized a protest against the Honor Code on school grounds and said they were hoping the office would change language they believe is discriminatory to LGBT students.

The group did not specify what language they saw as discriminatory or how they would have wanted it changed, and the website does not detail any similar changes.