SALT LAKE CITY — The lease-sale of seven oil and gas parcels on federal land in Box Elder County generated more than $35,000 in revenue for the Bureau of Land Management on Tuesday, but it also stoked a protest at the Utah Capitol.

About a dozen people showed up to express their concern about the potential impacts of oil and gas industry activity on land in the greater Great Salt Lake ecosystem, which supports more than 10 million migratory waterfowl and 300 distinct species of birds.

Carly Ferro, an organizing representative with the Utah Sierra Club and one of the speakers at the Tuesday protest, said the BLM parcels are only one of many contemplated development projects within an environmentally sensitive area, including the Inland Port.

Dean Dinas, who attended the protest, complained that the missing piece of the conversation revolves around the cumulative impacts of industry activity and its potential impact on the airshed.

"No one mentions the stacked environmental problems that will happen," he said.

Dinas said if the leases are developed, such activity will likely drive up fine particulate, or PM2.5 levels, which are already a challenge along the Wasatch Front. 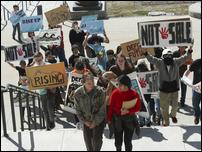 Young activists delivered a letter with over 1,500 signatures to the governor's office Monday asking him to take action on climate change by opposing the Bureau of Land Management’s oil and gas lease of 217,576 acres of public lands in Utah.

In its report of lease-sale results, the BLM said the parcel that sold for the highest amount went for $5,120. In total the sale generated $35,600.

Fiik Exploration LLC, out of Salt Lake City, submitted the highest total bid per acre of $2.