PROVO — Detectives on Thursday detailed the clues that strengthened their suspicion that a Utah man killed a young couple and dumped their bodies in an abandoned mineshaft in 2017.

On the second day of a preliminary hearing for Jerrod Baum, the law enforcement officers recalled finding keys belonging to Riley Powell, 18, and Brelynne "Breezy" Otteson, 17, scattered around a gravel pit near Baum's home in the tiny community of Mammoth in Juab County. They also described how they found the couple's bodies using a camera designed for probing sewer systems.

Fourth District Judge Derek Pullan did not immediately rule Thursday whether there is enough evidence for Baum to stand trial on two charges of aggravated murder. A conviction carries a possible death sentence.

Video footage played in court showed Baum's former girlfriend, Morgan Henderson, 35, pointing out where the teens' keys might be hidden around Baum's Juab County home. She also led officers to a barrel where detectives said they later found the couple's smashed phones, among other items. Sanpete County sheriff's detective Chad Nielson recounted Henderson becoming emotional one day almost a year ago when the road narrowed and they approached the mine, one of several she visited with investigators after agreeing to help them.

"As we were going to that mine, she'd become visibly upset," Nielson testified, but "she was being vague … she never identified this mine as 'This is the one.'"

Josh Chappell, a Utah County Sheriff's deputy, said investigators searched the Tintic Standard No. 2 because a road leading to the mine made it more accessible than others in the area that could only be reached on foot or ATV.

"If you were going to get rid of a body, it would be a more easy place to do that," Chappell testified.

Officers watched on a large monitor as a cable with a camera — on loan from sewer managers in Spanish Fork — was lowered partway down the 1,800-foot drop to the mine floor on March 27, 2017, he said. They spotted a male body on a ledge about 100 feet down and a female body another 20 feet below, Chappell said. They were later identified as Otteson and Powell. 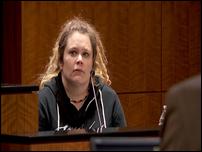 ‘I wanted those families to know what happened’: Ex-girlfriend testifies against man charged with murdering young Utah couple

The then-girlfriend of a man charged with murdering a young couple from Eureka and dumping their bodies down an abandoned mine shaft recalled watching in terror as he marched the pair to a remote corner of Utah desert and brutally killed them.

On Wednesday, Henderson, who agreed to testify against Baum in exchange for resolving several of her own criminal charges, recounted in vivid detail how her onetime boyfriend drove her and the teens to the foot of a cliff and led them to a mine shaft, where he made Henderson and the teen girl watch as he killed Powell before he took Otteson's life.

Defense attorneys questioned Henderson's credibility, focusing on her mental illness that causes her to hallucinate and her memory issues from a history of shock therapy for depression, in addition to her sometime use of psychedelic mushrooms.

Prosecutors said Thursday that despite the questions, they believe the evidence is strong. Henderson likely could not have carried out the killings by herself, and her memory of where the teen's belongings were hidden matched what officers found, said Randy Kennard, deputy Utah County attorney.

"The circumstance of any case is people are who they are, and we realize that," he said. "We're not trying to hide anything."

After the hearing, family members of the slain teens said they'd learned details they hadn't known before Henderson's testimony, but it did little to console them.

"We won't have the kids back, so we'll never have closure," said Bill Powell, Riley Powell's dad.

Amanda Hunt, the girl's aunt, and Powell still had questions about the chain of events and how Baum may have managed to subdue the pair, they said Thursday. Hunt said it was "debatable" whether Henderson was telling the truth and believes she may have downplayed her own role in the deaths. Powell agreed, saying he believed her testimony "to a point."

As part of an agreement with prosecutors, Henderson, told investigators her version of what happened. She admitted to initially lying to authorities and will be released from jail once Baum's case is resolved, court documents show.

Baum, who did not testify, faces eight felony charges in connection with the deaths.