PROVO — A man already facing a possible death sentence if he is convicted of shooting and killing a Provo police officer now faces additional charges for his alleged involvement in another crime.

Matt Frank Hoover, 40, was charged Friday in 4th District Court with failing to respond to an officer's command to stop, a third-degree felony, and giving false information to an officer, a class C misdemeanor.

On Nov. 1, Orem police were called to investigate a trespasser at a storage unit business. Police found Hoover and another person not named in charging documents who "both showed signed of drug use," the charges state.

Hoover allegedly gave the officer a false name. But when the officer ran a check on his license plate, he discovered Hoover's true identity and that he had warrants out for his arrest, according to the charges.

When the officer asked Hoover to step out of his vehicle, he sped away, the charges state. Orem police briefly engaged in a chase with Hoover, but terminated the pursuit when it became a danger to the public. 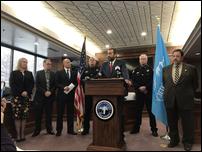 Man charged with capital offense in killing of Provo officer

On Jan. 5, officers from the Provo and Orem police departments again attempted to arrest Hoover after he was spotted in a pickup truck in the parking lot of Bed Bath and Beyond, 50 W. University Parkway in Orem. Hoover still had two warrants out for his arrest and had made threatening comments toward police that he did not want to go back to jail and was willing to "shoot it out" with officers, according to police.

As officers attempted to arrest him, Hoover fired one shot, striking Provo police officer Joseph Shinners. Shinners, 29, was taken to a local hospital but died from his injuries.

Shinners was also able to fire one round, striking and injuring Hoover.

Hoover was formally charged Wednesday with aggravated murder, a capital offense. If convicted, he could either be sentenced to death or face life in prison. The Utah County Attorney's Office has not yet said whether it intends to seek the death penalty.