Utah is 2-0 and BYU is 1-1, which are records each program would have gladly accepted before the season started. But neither fanbase appears confident in their team so far this season.

BYU started the season with one of the best wins in college football of week one. Knocking off Arizona and containing what was expected to be a Heisman candidate in Khalil Tate on the road felt like a sign of things to come for a revamped Cougar coaching staff.

That was until Arizona fell to 0-2 on the season, turning in a miserable 45-18 loss to Houston the following week. The strengths that BYU appeared to show against the Wildcats quickly changed to obvious weaknesses from Arizona, and was followed up by a BYU loss at home to California.

BYU struggled to move the ball, couldn’t get off the field on third down and failed to control the line of scrimmage. The performance, while competitive, more closely resembled the 2017 Cougars season than it did in their win over Arizona.

Utah is still undefeated on the season, but has more questions than answers two games into the year. Starting quarterback Tyler Huntley still makes the same mistakes he made in his first season as a starter, struggling as a passer and preferring to make plays with his legs over his arm.

Huntley has taken too many hits running the ball through two weeks to feel confident that he will suddenly prefer to live to play another down, rather than attempt to earn an extra yard at the risk of taking a big hit.

Utah’s play-calling at times is perplexing, going away from star running back Zack Moss in favor of inaccurate deep passes or quarterback runs. The Utes managed just 10 offensive points against Northern Illinois, needing a late defensive touchdown to put the Huskies away.

Despite records that should inspire optimism, both BYU and Utah embark on five-game stretches that will determine their season. To start, both teams kick off week three against nationally ranked opponents in the Top 10.

BYU will face No. 6 Wisconsin, a nearly surefire loss, with questions about who should man the job at quarterback. To this point, there is no indication that anyone but Tanner Mangum will be the starter as the Cougars travel to take on the Badgers, but that could change quickly with another turnover-laden performance.

Zach Wilson nearly earned the job in fall camp and may find himself once again vying for playing time if Mangum struggles. With McNeese State traveling to Provo on the heels of the Wisconsin game, BYU could set Wilson up for a soft landing should they decide to make a change at QB.

While Utah isn’t entertaining the idea of a quarterback change, their next opponent may truly illustrate the Utes' opportunity to win the Pac-12 South. Washington is ranked 10th in the country, and despite losing their season opener to Auburn, the Huskies may be Utah's toughest opponent of the season.

Should the Utes compete well, even in a loss, there should be optimism around the program. Should the Utes lose in blowout fashion, any hopes of winning the South may be diminished. 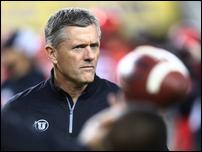 It’s one of those games Utah would like to erase from its memory, but the thought remains like a bad taste in the mouth. And head coach Kyle Whittingham isn’t ready for any of his offensive staff to forget about it.

Neither Utah nor BYU are expected to win their next games, but the sequence of opponents following this weekend will reveal the truth about these rosters.

The Aggies are just 1-1 on the season, but nearly upset a Top 25 team in Michigan State in their season opener. Coach Matt Wells' decision to go young last season has paid off this year, as the Aggies look like one of the more complete Mountain West teams.

Hawaii has shown a potent offense through three games, going undefeated, and has scored 43 points or more in each outing. Neither game will be a gimme for BYU, regardless of who is starting at QB.

After Washington, the Utes face a gamut of tough opponents: traveling to take on the high-scoring Washington State Cougars, before heading to Top 10 Stanford. Utah will then return home in matchups with Arizona and USC.

Realistically, the Utes will need to finish 6-3, or better, in conference to win the South, and will still have to play undefeated Arizona State, Colorado, and Oregon after this brutal stretch. The Utes will need to leave themselves with at least one game cushion against those opponents to have a chance to win the South, meaning they’ll likely have to go 3-2 over their next five games to feel confident closing the season.

The Utes have historically played Washington and Stanford tough, matching their style of play, but lost both late in the game last season. Washington State’s potent offense will force the Utes to score the ball, an area where Utah was anemic on the road against Northern Illinois.

A win over USC is likely a must-have to own the tiebreaker with the Trojans at the end of the season. Arizona will be Utah’s least dangerous opponent during the stretch, and will have likely improved from their 0-2 start by then.

BYU and Utah have started the season well, at least record-wise, but questions remain about the rosters. For the Cougars and Utes to feel confident in the success of their seasons, the next five games are crucial for both programs. Ben Anderson is a contributor at KSL.com, follow him on Twitter @BensHoops. Listen to him 2-6, Monday through Friday with Kyle Gunther on ESPN 700.