Trade disputes and tariffs placed on China and other trading partners have significantly and negatively affected agriculture across the country, and it’s no different for farmers and ranchers in the Beehive State, Adams said. The drought Utah experienced this year has also made it particularly difficult.

“Our dairy cattle are some of the worst affected, and right now, they are experiencing some of the lowest prices they’ve had on their milk,” Adams said. “We’re hoping (the tariffs) will be short-lived and any (trade) that can open up — that’s good.”

Trump announced the trade deal with Mexico on Monday, explaining that the accord would replace the North American Free Trade Agreement — a 24-year-old trade accord between the U.S., Canada and Mexico that’s seen its fair share of controversy.

While many praised NAFTA for removing trade barriers between the three countries, others criticized the deal for taking jobs away from U.S. manufacturers and moving them overseas — something Trump said this new deal will address.

While the specifics of the deal are still unclear, Derek Miller, president and CEO of the Salt Lake Chamber, believes the accord could provide local manufacturers with predictability and stability.

Utah exported about $180 million in food and agriculture products to Mexico and Canada in 2017, according to the Utah Department of Agriculture and Food, and both countries are two of Utah’s top trading partners. 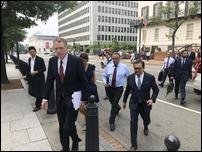 US and Mexico tentatively set to replace NAFTA with new deal

Snubbing Canada, the Trump administration reached a preliminary deal Monday with Mexico to replace the North American Free Trade Agreement — a move that raised legal questions and threatened to disrupt the operations of companies that do business across the three-country trade bloc.

Exports from Utah to Mexico have grown by over 300 percent in the last 10 years, Miller said, and state trade with Canada is even higher at over $3 billion in goods and services from Utah to Canada.

Trump will meet with Canadian officials Tuesday to discuss including the United States' northern neighbor.

“We are hopeful that Canada will join Mexico on the new trade deal or forge a new trade agreement directly with the United States. A trade agreement with Mexico outlines the ‘rules of the game’ so Utah companies can get in the game and win,” Miller said.

In the meantime, Adams wants to see the light at the end of the tunnel.

“I’m trying to stay positive and hoping that the future will be better and brighter,” she said.