TAYLORSVILLE — There seems to be a popular theme among the Rogers kids.

“My favorite game is Minecraft,” 6-year-old Brighton Rogers exclaimed sitting next to the computer.

“You get to build whatever you want,” 12-year-old Stratton Rogers chimed in.

Despite the Roger kids’ love for video and computer games, Serity and Ric Rogers set a few ground rules for their children.

Screen time in the Rogers home starts the old school way by setting the microwave timer. 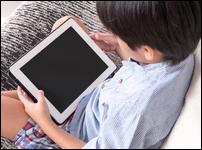 “This might sound crazy. We only give them a half hour a day of free screen time,” Serity Rogers said.

The Rogers learned the hard way with one of their sons.

“If he gets on screens first thing in the morning, you’ve lost him for the day because he just dives in and that’s what he wants to do for the rest of the day.”

Intermountain Healthcare clinical psychologist Dr. Bruce Poulsen described the connection between too much screen time and a sedentary lifestyle.

Poulsen suggests limiting screen time to one or two hours a day.

Parents, there's yet another reason to limit screen time for your kids: It could contribute to future heart disease.

“With kids, it should be sit less and play more,” he described.

“I think every kid should know how to kick a ball and throw a ball and catch a ball,” Ric Rogers said.

They encourage their kids to get outside and play on their bikes and roller blades. But they also think outside of the box to keep their kids moving.

“We mow two lawns and we do a ton of yard work,” Creighton Rogers said.

With their parents’ encouragement, Stratton and Creighton Rogers started a neighborhood business to help them stay active.

“We’re trying to teach them that they can control themselves and put limits on it and they will be just fine,” Ric Rogers said.

Poulsen says it's important to expose kids to physical activity and being outdoors from an early age because it becomes difficult to make those health changes later in life.