SALT LAKE CITY — A day after the Iron County Attorney's Office concluded that an Enoch police officer was not legally justified when he shot a woman holding a screwdriver, the Enoch Police Department says that officer's actions were appropriate.

The Enoch Use of Force Review Board "unanimously concludes that Cpl. Jeremy Dunn’s actions were within department policy," the department said in a statement released Tuesday.

On Monday, Iron County Attorney Scott Garrett determined that Dunn's use of deadly force was illegal. However, he said he would not file any criminal charges against the officer.

The different conclusions were based in part on a recording of the confrontation from Dunn's body camera. But despite reviewing the same video, the Iron County Attorney's Office and the Enoch Use of Force Review Board apparently interpreted what was happening in different ways.

On June 28, Dunn responded to assist another officer who had detained two of three people suspected of breaking into vehicles at a truck stop in Parowan. A Parowan officer had Ivonne Casimiro, 29, stopped at gunpoint along with another man. Casimiro was holding a screwdriver and refused to put it down.

Casimiro had twice taken a swipe at the Parowan officer with the screwdriver, but then did not make any more movements toward the officer, according to Garrett's report. The officer even noted that he lowered his gun "and that he felt the situation was manageable," according to the report.

When Dunn arrived, Casimiro was "defiant" and did not follow his orders to drop the screwdriver, Garrett said in his report. She took a couple of steps toward him at one point, and told him to "go ahead and blow," the report states.

Dunn replies that if she comes at him, he "guarantees" he will "smoke her," the report states.

But according to Garrett's report, "She never advances. In fact, she retreats a few steps as they continue to converse."

Even after Dunn unsuccessfully tried to use his Taser and Casimiro continued to be defiant, "She does not advance on the officers, nor does she make any movement toward anybody else," the report states.

Yet the Enoch Review Board concludes that she did step forward.

After two failed Taser attempts, Casimiro "taunts" Dunn, continues to act "erratic," and then "raise(s) the screwdriver in her right hand across her body appearing to load for an attempt to strike," the review board report states. "The female suspect took a step forward with her left leg while her right arm was cocked, holding the screwdriver, and stated, 'What’s up?'"

Dunn, who was standing about 10 feet away, then fired three times, aiming for Casimiro's knee.

"After firing one shot and not seeing changes to the physical demeanor of the female suspect, Cpl. Dunn fired two more shots and immediately observed the female suspect sit down, neutralizing the threat to others," according to the Enoch Review Board report.

Both Dunn and the other officer offer immediate medical assistance to Casimiro after shooting her. Dunn is seen in the video placing a tourniquet on her leg. 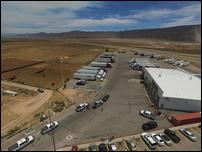 An officer-involved shooting in June has been found not justified, but the officer who shot a woman in the leg during a suspected robbery will not face criminal charges, according to the Iron County Attorney's Office.

The review board consists of five members — all employees of the city: The mayor, the city manager, the police chief, an Enoch police officer and a member of the Enoch City Council.

City Manager Rob Dotson said he's not sure why the review board and Garrett did not see eye to eye on the shooting.

"I guarantee you we believe that no criminal charges should be pressed. It was not a criminal act. Obviously, we disagree with the decision if it was justified or not. But, that's different perspectives, I guess, on the same incident," Dotson told KSL.

"We have a great relationship with Scott Garrett. Their investigation was thorough and unbiased, and I think it was just seeing things in a different way, I guess."

The incident was the second time Dunn shot someone while on duty in five years. In both cases, Dunn shot a person in the knee who refused to drop a weapon. In the 2012 incident, the shooting was determined to be legally justified.

Although Utah Peace Officer Standards and Training — the organization that certifies all police officers in Utah — does not teach officers to aim for knees or hands, but rather to aim for the largest body mass, typically the chest or head, it is not illegal to shoot a person's knees to stop a perceived attack.

In this case, "Cpl. Dunn chose to incapacitate the female suspect using lethal force in a nonlethal manner" the Enoch report states.

"Cpl. Dunn felt his action was the least detrimental to the suspect at the time," Dotson said. "Officer Dunn felt that what he didn't want to do was kill someone."

Dunn remained on paid administrative leave Tuesday, "until a determination can be made in compliance with and by all relevant agencies," according to the statement. Dotson said it is his understanding that the city attorney still needs clearance from POST and the insurance company before Dunn can return to work. He was unsure when that would be.

Dunn has been with the Enoch Police Department for seven years.