MADISON, Wis. — A Spanish Fork teen dominated his new age division at the CrossFit Games over the weekend, proving he may just be the fittest teen in the world.

Dallin Pepper placed first in the 16- and 17-year-old boys division at 2018 Reebok World CrossFit Games over the weekend, compiling a whopping 824 points — nearly 200 points ahead of the second-place finisher.

Points are awarded based on how a competitor places in each event. Pepper won three events and placed in the top 10 for all 11 individual events.

“Obviously, I was really happy to see my hard work pay off, but one thing I’ve learned is you just have to fall in love with the process and not expect happiness to come from the end result,” Pepper said, regarding his back-to-back wins.

Haley Adams, of North Carolina, won the 16- and 17-year-old girls division after she won nine of the 11 events within her division. Mathew Fraser and Tia-Clair Toomey won the overall men and women’s titles at the 2018 world event.

Pepper’s career only began a few years ago. His interest in the sport started after he caught the 2015 CrossFit Games on TV. He then blossomed into one of the best CrossFit teenagers, winning in 2017. 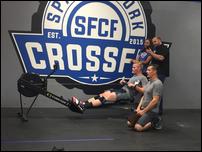 When Dallin Pepper’s parents first introduced him to CrossFit, he wasn’t a fan. Now the Spanish Fork Junior High student isn’t just active in CrossFit, he’s better at the activity than anyone his age in the Southwest Region.

Even with a second world win now under his belt, Pepper already has 2019 on his mind. He said he will go for something that has never happened before: A three-peat in the teenage divisions of the event. He also wants to start competing with the adults and work his way into the main division.

As for the praise he has received for his success, Pepper said he’s humbled by it.

“It shows all the hard work and all the sacrifice I’ve put into this is paying off,” he said.