“It’s a little disheartening,” he said. “I was prepared to come to see nothing and that’s what I found.”

Stone got the phone call he had been waiting for on Friday — his stolen camper trailer had been found. A West Valley City police officer told him it was abandoned off a side road and covered with tarps.

Stone was hoping his items were still inside the camper but when he arrived at the impound lot to pick it up, he knew right away — his clothes, camping gear, cooking items were all gone.

So were his medical supplies.

“Catheters. Like, why would anybody want — you can’t sell those. What are you going to do with catheters? I have no idea,” said Stone.

You see, Stone is a quadriplegic after a paragliding accident. He needs a wheelchair to get around.

Stone also needs this custom camper trailer to do his job. He lives in Montana, but travels the country as a motivational speaker to speak to others about overcoming adversity.

The camper trailer is a basic necessity for him.

“They worked with me to build this custom (trailer) to accommodate my wheelchair and just how I need to move around in here,” he said. “I’m able to manage it and do everything I need to do and do all the traveling I want to do. I can work from in here. This is everything, you know?”

The camper trailer was stolen from the parking lot of the Residence Inn by Marriott in Sandy last week.

Stone was in Utah to shoot some videos for an HBO series on Project Airtime, which he’s a part of talking about his accident. When he came back to the hotel, the camper trailer was gone. 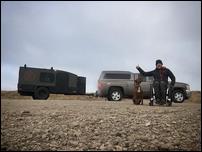 Motivational speaker and paraglider Joe Stone is hoping to recover his camper that was stolen from a hotel in Sandy on Wednesday, July 18, 2018.

All that was left was the broken plastic wheel chocks he used to keep the trailer from rolling.

“I’m really thankful to have it back, but it’s kind of bitter sweet because now the work starts to get it up and running again,” said Stone.

“Like, I’m almost not even mad at them,” said Stone. “If your life is that sad that you have to go and do that kind of stuff to survive, whatever you got going on is way worse than what I’ve got going on, so.”

Overcoming adversity is what he’s good at.

“I can rebuild this. I can get new things. I can. They’re just things. It’s just a big bump in the road.”