Where to watch Fourth of July fireworks in Utah

SALT LAKE CITY — Independence Day fireworks displays have been around for nearly as long as the U.S. has been a country; the first display was held in Philadelphia on July 4, 1777, one year after the colonies declared their independence from Great Britain.

In the 241 years since that first display, it's fair to say that John Adams has gotten his wish, as fireworks have become a treasured part of the Fourth of July tradition across the country. Find the city closest to you below. Admission to the events below is free unless otherwise noted.

And if you're doing your own show, check out our guide to where you can and can't launch fireworks this year. 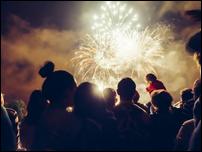 Here's where you can and can't launch fireworks in Utah

Monday marks the start of an abbreviated first part of the July fireworks season, much in part to changes made to the fireworks laws during the legislative session. Here's where you can and can't light fireworks in Utah.

Whether you're heading to a show or doing fireworks of your own, remember not to leave your dog alone outside; the Humane Society of Utah often sees a spike in runaway pets trying to escape fireworks. They suggest keeping your pets inside with the curtains or blinds closed and leaving the TV or music on to muffle the sound. ____

Doors open at 7 p.m. and entertainment provided by Mile Marker 6, The Strike and Party Crashers begins at 8 p.m. The fireworks show will be at dark. The event takes place at Logan’s USU Maverik Stadium, 899 E. 1000 North. Tickets are $8 each or six for $36 and can be purchased online Monday or in person starting at 10 a.m. the day of the show.

The Orem Owlz will have a fireworks show immediately following their game against Grand Junction at Brent Brown Ballpark, 800 W. University Parkway in Orem. The game starts at 7:05 p.m and tickets can be purchased online or in person.

Start the night off with an 8 p.m. concert with Terri Clark and stay for the fireworks show. Doors open at 7 p.m. at the Tooele High School Football Stadium, 240 W. 1st Street. Tickets are $5 and available at Tooele City Hall (90 N. Main St.)

Fireworks start at 11 p.m. Tuesday and 10 p.m. Wednesday at Willow Creek Park, 57 N. 200 East in Willard. The fireworks are free, but activities held either day may have an associated cost. Check here for details.

Fireworks will take place after the 8 p.m. PRCA rodeo at 4300 N. state Route 32. Tickets to the rodeo are sold out, but you can still watch the fireworks show from the lawn if you park nearby.

Blanding claims this year's fireworks show will be the second-largest in Utah, so don't miss out, starting at 10 p.m. The show will be held at Centennial Park, 1200 S. 300 West.

A fireworks show will take place at Smith's Ballpark, 77 W. 1300 South in Salt Lake City, following the Bees vs. El Paso game. The game starts at 6:35 p.m. and tickets can be purchased online or in person.

OneRepublic headlines at this year's Stadium of Fire, held at 8 p.m. at LaVell Edwards Stadium, 1700 N. Canyon Road in Provo. Tickets start at $35 and can be purchased online.

Fireworks begin at dark at Rees Pioneer Park, 800 W. Forest St. Be there by 8 p.m. for the Greg Simpson concert.

There will be a fireworks display at 9:45 p.m. from 1600 North and Lund Highway. Watch along Lund Highway, Aviation Way or Airport Road.

Fireworks begin at 10 p.m. at Layton Commons Park, 465 N. Wasatch Drive, following a carnival with entertainment that begins at 12:30 p.m.

Fireworks begin at dusk at the rodeo grounds, 180 E. Center St. The rodeo starts at noon.

Fireworks begin at dusk at Liberty Park, state Route 162. Games and entertainment will take place in the morning and dancing starts at 8 p.m.

Fireworks will begin around 10 p.m. from Memorial Hill, 38-40 River Road. Fireworks can be seen from multiple places in Midway, including Hamlet Park and Town Square.

Fireworks will be choreographed to a playlist aired on 97.1 “KCYN” and showcased from Lions Back at about 10 p.m.

Park City Mountain Resort, 1345 Lowell Ave., will start its fireworks at dusk. Resort hours will be extended from 10 a.m.-9 p.m.

The all-day event closes out with fireworks at 9:30 p.m. at the Carbon County Fairgrounds and Event Center, 310 S. Fairgrounds Road.

Fireworks will start at 9:30 p.m. in the west hills of Richfield after all-day events.

Fireworks will start at 10 p.m. at the South Towne Promenade, 10000 S. Centennial Parkway in Sandy. The Salamanders will perform a post-fireworks show.

Fireworks will start at 10 p.m. at Trailblazer Stadium at Dixie State University, 225 S. 700 East, after the KONY country concert. Concert attendees must have wristbands.

West Point Party at the Point

Did we not include your city's fireworks celebration? Share the details of it in the comments.