Toomer, a former Army nurse, contracted polio after the birth of her first child in the 1950s. From then on, she used a wheelchair for mobility, which was decades before federal laws that require accessible entrances to public buildings, curb cuts on sidewalks or accessible forms of public transportation.

Throughout a long career of paid and unpaid advocacy, Toomer lobbied for laws and public accommodations to enable people with disabilities to participate fully in their communities.

She was among the founders and leaders of Community Shares/Utah; the Utah Independent Living Center; ADAPT/Utah; and the Disabled Rights Action Committee. She was also a Democratic Party delegate for many years.

Well into her 80s, Toomer helped organize and participate in demonstrations urging the federal government to provide community supports for seniors for people with disabilities who want to remain in their homes instead of going to nursing homes to receive the care they need.

Over the years of working on that issue, she personally lobbied President Bill Clinton and Cabinet members of the George W. Bush administration, according to her obituary.

Earlier, she rallied against public transportation systems that were inaccessible to people with disabilities. She and other activists around the country frequently picketed the meetings of the American Public Transit Association, which had filed a lawsuit seeking a reversal of a President Jimmy Carter administration mandate that they purchase only accessible buses as they retired older buses.

The association prevailed, but under the Americans with Disabilities Act of 1990, transit systems were required to only purchase accessible buses.

Toomer has been honored multiple times nationally and in Utah for her activism and advocacy.

In accepting the NAACP Salt Lake Branch's Rosa Parks Award in 2017, Toomer said she felt a kinship to Parks.

"I always felt Mrs. Parks and I have the same goals: She didn't want to move to the back of the bus and I just wanted to get on the bus," a newspaper report said at the time. 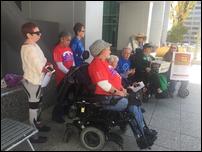 Members of Utah's Disabled Rights Action Committee would expel Sen. Orrin Hatch from Congress unless he shows more support for people with disabilities.

Toomer frequently conducted press conferences and offered media interviews on disability and civil rights issues. She lobbied elected officials in Utah for changes in state policies and federally for passage of the landmark Americans with Disabilities Act. She was a plaintiff in disability rights lawsuits and was arrested several times during various protests.

While Toomer was known by many as a public advocate, she assisted many people with disabilities privately by referring them to helpful community resources or by simply offering encouragement.

Born and raised in California, Toomer was a graduate of St. Joseph's College of Nursing in San Francisco. She joined the Army Nursing Corps in 1953 and achieved the rank of first lieutenant.

After basic training, she was assigned to Fort Bragg, North Carolina, where she served in a variety of posts. It was there she met her future spouse, Capt. Gerald Ross Toomer. They married in September 1953. The couple had three children, Jean, James and Jennifer, who survive her.

At her request, her body was donated to the University of Utah School of Medicine to further the education of students.