A guide to the rules regarding service animals

SALT LAKE CITY — You’ve likely heard the stories where a business or an airline refused to let people bring a service animal with them.

So what are the guidelines regarding service animals?

The Americans with Disabilities Act specifically defines what is and isn’t a service animal. It also lays out guidelines for how businesses and other entities can treat those animals in public spaces.

Here’s a rundown of some of the rules regarding service animals.

What is a service animal?

The Americans With Disabilities Act defines a service animal as a dog that has been trained specifically to do work or tasks to assist someone with a disability. Those tasks must be directly related to the person’s disability.

There’s a difference between service animals and other animals that are thought of as emotional support, therapy, comfort and companion animals. Since those animals haven’t been trained to perform a specific task to help someone with a disability, they’re not considered service animals under the ADA.

"However, the ADA makes a distinction between psychiatric service animals and emotional support animals," according to the ADA website. "If the dog has been trained to sense that an anxiety attack is about to happen and to take a specific action to help avoid the attack or lessen its impact, that would qualify as a service animal. However, if the dog's mere presence provides comfort, that would not be considered a service animal under the ADA."

Any breed of dog can become a service animal, according to the ADA. A business can’t refuse a service dog entry just because it’s a certain breed.

Where are service animals allowed?

Service animals should generally be allowed to accompany people with disabilities anywhere the public is allowed to go, according to the ADA. That includes businesses, hospitals, government buildings and other areas.

Businesses that prepare food must allow service dogs in the food areas even if that goes against health or food regulations. However, a restaurant isn’t required to provide food or other accommodations for the animal.

Businesses and other establishments can only refuse entry to a service animal if it “fundamentally alters” the nature of the services or programs offered, according to the ADA.

For example, a service dog might be prohibited from going to a part of a zoo where a dog’s natural predators are housed, because the dog’s presence there could provoke or be disruptive to the zoo animals. A service animal could also be banned from an area of a dormitory or boarding school that is specifically designated to house people with dog allergies. 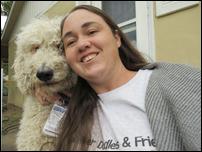 The difference between a service animal and an emotional support animal

It’s becoming more commonplace for customers to bring animals into places of business, which is causing problems for those who need and use true service animals.

Otherwise, a service dog and his or her handler may only be asked to leave a certain area if the dog is out of control and the handler is unable to control the dog.

Service animals must be harnessed or leashed, unless that would interfere with the service animal’s ability to do tasks, or if the handler is unable to use such devices due to a disability. Those people must be able to control their animals with the use of voice or other signals, according to the ADA.

Religious organizations are exempt from the ADA. That means you might not be able to bring your service animal into a place of worship, depending on the establishment’s rules.

Can a business employee ask someone to prove their animal is a service dog?

There are only two questions a business owner or employee may ask in relation to a service animal, under the ADA.

They can ask if the dog is a service animal required because of a disability, and they can ask what work or tasks the dog has been trained to perform.

There are organizations and individuals that sell service animal certifications or registration documents online. According to the ADA website, these documents do not give the owner any rights under the ADA and the Department of Justice does not recognize them as proof that the dog is a service animal.

Business owners and employees are not allowed to ask that the dog perform the tasks or work for which the dog has been trained, according to the ADA.

Do these rules apply to airlines?

The ADA doesn’t apply to commercial airlines. The law that protects persons with disabilities on airlines is known as the Air Carrier Access Act, and it’s a little different from the ADA.

Unlike the ADA, the Air Carrier Access Act defines a service animal as any animal — not just a dog — that is trained or able to assist a person with a disability.

The Air Carrier Access Act also protects emotional support animals that are shown to be necessary for the emotional well-being of an airline passenger according to documentation.

For domestic flights, airlines are required to transport all service dogs, and some emotional support animals except for some special or unusual animals, including snakes, rodents, ferrets and spiders.

For international flights, the Air Carrier Access Act only requires airlines to transport service dogs and not other animals.

Air carriers also can require that a service animal’s handler provide documentation showing that an animal will not need to relieve itself during the flight, or that it can relieve itself in a way that will not create a health hazard for other passengers on the flight.

Passengers with service dogs may also be asked to give 48 hours advance notice to the airline so that it can prepare for certain accommodations such as respiratory hook-up and transportation of an electric wheelchair on an aircraft with less than 60 seats.

The airline may require specific documentation and/or 48-hour advance notice for emotional support and psychiatric service animals. Those documents must come from a licensed health care professional and must state that the individual has a mental or emotional disability and the animal is needed as an accommodation for air travel and/or for the activity at their destination. The documents may not be older than one year from the date of the scheduled initial flight.

What questions can airline employees ask about a service animal?

Air carrier employees can’t ask about a person’s disability. However, they can ask if a service animal accompanying a person is that person’s pet. They can also ask what tasks or functions the animal performs for the person.

The department of transportation recommends that airline employees take several steps to find out if an animal is a service animal or a pet.

Employees should ask the person about the animal and observe the animal's behavior.

Employees can also ask for documentation regarding emotional support and psychiatric service animals, according to the Air Carrier Access Act.

What can I do if I believe a business or other entity has broken a rule regarding service animals?

You can file a complaint with the U.S. Department of Justice if you believe you’ve been denied access or services because of a service animal. You can also file a private lawsuit against a business or entity in federal court.