Vaping in Utah: Trendy, high-tech and unhealthy, but better than smoking?

SALT LAKE CITY — Via is 15. Her vaping flavors of choice: strawberry or mango.

“The flavor is good,” she said.

“You can smoke them anywhere. It doesn’t smell. It’s vapor,” said Kierra, now 17.

E-cigarette use among Utah teens is growing, and the concern that using them will lead to more dangerous habits, such as smoking cigarettes, is increasing right along with it.

But officials in the vaping industry tout e-cigarettes as a way for adults to effectively quit smoking tobacco by offering what they say is a healthier alternative.

Some teens say they don’t believe vaping is as bad as lighting up and smoking traditional cigarettes, and they also say e-cigs look cool and taste good.

“Unfortunately, we are seeing some growth in that area,” said Brittany Karzen, who leads the anti-smoking and tobacco prevention program at the Utah Department of Health.

Since 2011, Utah youth use rates have tripled, despite the law prohibiting sales to minors, according to the health department.

State health officials also say teens are more likely to use e-cigarettes than any other tobacco product on the market.

“And that's a concern, because they contain nicotine, and nicotine is bad for developing brain,” Karzen said. “We also know that teens who use e-cigs are more likely to try other risk behaviors.”

Karzen says prevention efforts aimed at parents and schools from the state health department are coming this spring.

As e-cigarettes or vaping grows in popularity and accessibility, the latest device some children are using to conceal underage smoking is called a JUUL, a vaporizer that looks like a flash drive. "The internal battery is more easily concealable from parents," said Linnea Fletcher, who tracks these trends at the Utah County Health Department.

"Most of it is sold online, and that’s how most of these are getting it," she said.

According to the Truth Initiative, a nonprofit public health organization "dedicated to making tobacco use a thing of the past," 25 percent of 15- to 24-year-old JUUL users do not identify their behavior as vaping and instead refer to it as “JUULing.”

Schools in Utah are starting to see the devices, Fletcher said.

Health officials say many underage smokers believe they're vaping flavored liquids, and 37 percent of teen and young adult JUUL users are uncertain whether the product contains nicotine, according to the Truth Initiative.

"But with the JUUL, it always contains nicotine," said Fletcher, and nicotine is what causes teen brains to become addicted.

A gateway to smoking?

The e-cigarette industry insists its products are not a gateway to smoking traditional cigarettes, but scientists are finding otherwise.

“The jury is out about whether e-cigarettes directly cause cancer, but we do know that people who use them are three times more likely to transition to cancer-causing tobacco cigarettes than people who don’t use e-cigarettes,” said Dr. John Heymach with the American Society of Clinical Oncology.

The National Academy of Sciences announced recently that vaping can be addictive and may lure teenagers to smoking.

And the University of Michigan found teens were six to seven times more likely to pick up regular smoking after a year of vaping.

A main concern for Karzen is that nicotine changes the teen brain and makes it more prone to addiction — and other risky behaviors like drinking alcohol — in the future.

“If a youth is willing to try e-cigarettes, they may also be willing to drink or these other things we are concerned about youth engaging in,” she said. 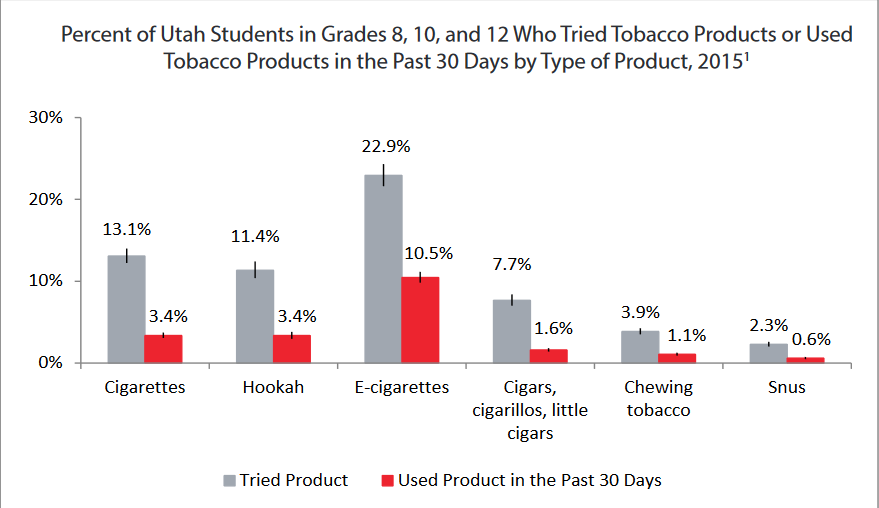 Utah lawmakers are working to regulate e-cigarettes in Utah, but the industry is growing rapidly — and it's fighting back.

Various bills have been introduced, debated and passed to address e-cigarette labeling, regulation, ingredients and access to minors.

"(There's) not a single state who has fought longer or harder or faced a bigger attack against the industry than here in Utah," Aaron Frazier, with the Utah Smoke Free Association, said at the end of last year's legislative session.

"The problem is, for a small child, a mouthful or less is enough nicotine to cause serious problems," she said. "The other concern we have is what else may go into these products that may get sold." A new study from the National Academy of Sciences found that e-liquids and the aerosol in vaping both contain toxins and can be carcinogenic, although levels are lower than traditional cigarettes.

"For every brand of e-liquid that disappears from the shelves, there are hundreds of vapers who will likely return to smoking," Frazier said.

Kierra says she switched from smoking to vaping because she believes it's healthier.

"And instead of buying a pack of cigarettes every day for $7 or $8, I buy a 10 milliliter bottle of e-cig liquid every two weeks for $8 dollars."

Adult use of cigarettes in Utah use rate is down from recent years, now sitting at 8.7 percent, according to the Utah Department of Health.

At the same time, e-cigarette products are exploding in growth. Six years ago, there was one vape shop in Utah. Now there are about 100.

“The landscape of this industry has completely changed,” he said.

But Utah Tobacco Prevention and Control Program officials say only some smokers are moving all the way to from tobacco cigarettes to nicotine e-cigs.

“We know 36.7 percent of those who vape in Utah also smoke. That’s dual use,” Karzen said, citing Centers for Disease Control and Prevention data.

“If you do chose to use an e-cig, science says quit cigarettes completely and move completely over to reap any benefit from the process,” she said.

Karzen recommends Food and Drug Administration-approved products and ways to quit, such as patches, gum, lozenges, and calling a quit line or getting coaching. Those methods, she said, will make a person two to three times more likely to quit successfully.

“It’s a hard habit to kick. We need to be more supportive of those wanting to quit,” Karzen said.

“Electronic cigarettes are not approved FDA cessation devices to help adults stop smoking. We recommend they taper down, and are not just switching from one addiction to the next,” she said.

Adults can choose what they do, Fletcher said, but health officials want to protect kids and youths.

“They are our main concern,” she said.