Utah deputy: 'I just made the decision I was going to go get him'

10PM: Utah deputy: 'I just made the decision I was going to go get him'
Alex Cabrero, KSL TV

6PM: Utah deputy: 'I just made the decision I was going to go get him'
Alex Cabrero, KSL TV

5PM: Utah deputy: 'I just made the decision I was going to go get him'
Alex Cabrero, KSL TV

During a news conference at the sheriff's office Tuesday, Thompson recounted his heroic story of diving into the icy water, finding the boy by using his hands and arms to pound through the ice, and pulling him out to shore. As of Tuesday afternoon, the boy, whose name has not been released, remained at Primary Children's Hospital under sedation, according to police.

The incident happened about 5 p.m. on Christmas Day when the boy chased his dog onto a frozen pond near New Harmony. About 25 feet from shore, the boy fell through the ice, according to police.

Thompson, who is a former lieutenant for the sheriff department's dive team, was one of the first to arrive on scene. Initially, it was reported that two children had fallen into the water, he said.

A woman who was on the shore said she last saw the boy's hand sticking out of the water about four minutes earlier, Thompson said. Based on that, he said, he had to act quickly.

Knowing that paramedics were standing by to rescue him if he also got into trouble, Thompson walked out onto the pond for a few feet before stomping on the ice and going in. The hole in frozen pond where the boy had fallen in was fairly large when emergency crews arrived, giving Thompson a wide area to search.

Once he was in the water, Thompson started using his fists to break through the ice to get to where the boy was believed to be.

"As the ice got thicker, I couldn’t break it with my arms and my fists anymore. So I had to jump up on top of the ice to put my weight on it and pound on it to get it to break,” he said.

The water got deep enough that Thompson couldn't touch the bottom. But there were reeds that he could feel with his toes. Thompson said he floated with water up to his neck as he stretched his toes to follow the reeds, knowing he would eventually bump into the boy.

At that point he said the adrenaline had taken over.

"Really, I couldn’t feel anything. I didn’t notice anything when I was doing it. I knew time was of the essence. I had a very short window to get that child out of the water,” he said. 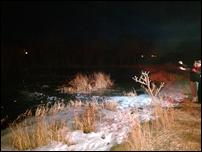 Sergeant punches through ice to rescue boy who fell in pond

An 8-year-old boy is in the hospital after he fell through ice and into a pond while chasing after his dog on Christmas, authorities said.

But after a few minutes of searching and not finding him, Thompson conceded, "I was getting desperate."

Thompson choked up as he admitted Tuesday that he even began calling out to the boy.

Finally, he felt the boy, who was beyond the area of the pond that was broken out, he said. Thompson dove down in the water and pulled the boy's head above the surface and started heading back to shore.

I knew time was of the essence. I had a very short window to get that child out of the water.

Once on shore, the boy was immediately loaded into an ambulance and a Life Flight helicopter was standing by. Thompson said he then went to sit in his patrol car to assess his own injuries.

Thompson was taken to a local hospital where he was treated for cuts and hypothermia. On Tuesday, he showed the stitches and cuts on his forearms from breaking through the ice.

He was released from the hospital Monday night, but once he got home, he said, it was a "sleepless night." Thompson suffered nerve damage and couldn't feel two of his fingers Monday night.

Officials estimated that the boy was in the water for about 30 minutes and Thompson for several minutes. He said the cold water worked in the boy's favor.

"The temperature of the water was huge in this case to help that boy recover. The colder it is, the longer we have (to find him)," he said.

The sheriff's office also said that the dog the boy chased onto the ice also survived.