A patchwork of laws and presidential directives currently governs the unauthorized disclosure of national security information, making it difficult to prosecute people, Stewart said. His bill would create a single statute through which all leaks could be addressed.

"Leakers are not heroes. Leakers are criminals," the congressman said in a statement.

Citing figures from the Senate Homeland Security Committee, Stewart said leaks have increased dramatically under President Donald Trump. In the first 126 days of the George W. Bush and Barack Obama administrations, there were eight and nine leaks, respectively. That number jumped to 62 in the Trump administration.

Stewart said revealing classified information harms the nation's credibility and undermines the men and women who protect national security. Leakers, he said, don't care about that and should go to jail. Rather than use whistleblower laws, they go to the press, he said. 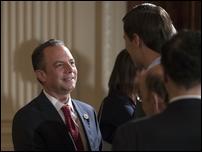 All types of leaks: good, bad, gossipy, 'shiv in the ribs'

In Washington, leaks don't just come from the pipes.

"It's just wrong. It's wrong on so many levels," Stewart said Friday on KSL Newsradio's "The Doug Wright Show." "This seems like a completely reasonable response to the challenge that we have right now."

Stewart said he has co-sponsors in the Senate for the bill and that the White House would like to see it pass. He said the bill could move quickly and pass as early as this fall.