SALT LAKE CITY — Current, former and possibly future members of the State School Board, the Utah PTA and Utahns for Public Schools have filed a lawsuit challenging the constitutionality of a law passed by the Utah Legislature in 2016 that calls for partisan Utah State Board of Education elections.

At a press conference on the steps of state Capitol Tuesday, the plaintiffs said SB78, sponsored by Sen. Ann Millner, R-Ogden, could result in a partisan curriculum, partisan practices and the employment of partisan school leaders.

State School Board member Carol Lear said public schoolchildren "should be taught how to think, not what to think."

Denis Morrill — a former State School Board member, chairman of Utahns for Public Schools and a plaintiff in the litigation who served 10 years on the board and five years on the Granite Board of Education — also supports the lawsuit.

"I can’t imagine being bound by party platforms as you try to focus on what is best for kids. The rancorous rhetoric of today’s party politics would completely divert the attention of the school board from kids to politics. There is no room for partisan politics in these races. The focus must be on kids," Morrill said in a statement from the group.

According to the Utah Legislature's website, the bill passed by a vote of 24-4 in the Utah Senate and 50-23 in the Utah House of Representatives.

The plaintiffs claim the legislation violates Article X of the Utah Constitution that forbids the imposition of any partisan test as a consideration for employment within Utah’s school systems.

The lawsuit asserts that school board members are employees within the public school system because they are paid salaries and receive employee benefits along with all other education employees.

"Board members are 'employed' in the additional sense that they are used and useful in furthering administration of education policies — set by the Legislature — in the state of Utah. Under Utah's Constitution, as senior executives, they are given power to 'supervise' and 'control' the management of those policies," the lawsuit states.

To run for office, candidates must register a party affiliation "and pass whatever 'tests' of political purity, fitness or soundness imposed by those parties, 'qualifying for nomination through the caucuses and conventions associated with the same," the first claim of the lawsuit states.

The second claim of the lawsuit says that by requiring school board candidates to run in partisan elections, the caucus/convention candidate nomination process for partisan candidates violates the “one person one vote” principle of the Utah Constitution.

"Neighborhood voting precincts, which are the core of that process, are not of uniform size, and the delegate allocation process followed by the political parties arbitrarily and deliberately further disequalizes the voting power of voters in those unequal precincts," the plaintiffs' press release states. 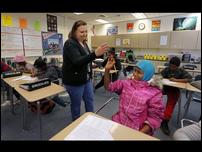 The state of Utah would require educators who seek teaching licenses to pass a teacher pedagogical assessment under a bill unanimously approved Friday by the Utah Legislature's Senate Education Committee.

The lawsuit says SB78 "offends the literal language of Article X, Section 8, because employment as a board member is conditioned upon and made subject to vetting, testing and qualification through an election process which is partisan in nature."

The lawsuit notes that at statehood, Utah's superintendent of public instruction was selected by a partisan electoral process while the state school board was appointed.

The Utah Constitution was amended in 1950 to remove the state superintendent as a partisan political officer. The superintendent has since been appointed by the State School Board.

Although the manner by which board members have been elected has varied over the years, "each of these changes and variations has shared one common characteristic: all board elections were nonpartisan in nature, showing that the Legislature understood the constitutional intent behind that 1950 amendment and kept faith with that intent," the lawsuit states.

Josh Kanter, board chairman of the Alliance for a Better Utah Education Fund, a plaintiff in the litigation, said few things should be less partisan than the education of Utah's children.

“We should be doing all that we can to depoliticize anything relating to the success of our education system, not adding to that politicization. Making school board elections partisan will deter some of our most qualified school board candidates and is exactly the wrong thing to be doing in the state and in this political climate,” Kanter said in a prepared statement