SALT LAKE CITY — Attorneys in Utah filed a wrongful death lawsuit against Polaris for the fiery deaths of two Arizona women, alleging the all-terrain vehicle they were in was unsafe.

Destiny Dixon and Debbie Swann were killed in Grand County over Labor Day weekend last year when their ATV tipped on its side and caught fire in Moab.

The suit alleges the maker of the vehicle was negligent in design and seeks unspecified damages.

The Salt Lake law firm filing the suit said a total of three people have died in Utah in the past two years due to fires in Polaris off-highway vehicles, including Swann and Dixon who were both on a Polaris Ranger 800.

Plaintiff attorney Eric Olson said law enforcement officials who investigated the incident determined the gas cap was impacted when the ATV turned over, which caused it to come off allowing fuel to spill out of the gas tank.

Olson said friends who were with Swann and Dixon when their ATV tipped over tried to help them, but it caught fire before they could be rescued.

“Right before they could get there, it burst into flames and there was nothing they could do,” Olson said. “Everybody who was with Debbie and Destiny had to watch them burn to death.”

Polaris responded to the lawsuit with the following statement:

“Our investigation and all available information confirms that the accident was not caused by any defect. The 2010 Ranger complies with all applicable standards and is safely designed for its intended use. The accident in this case took place in an area commonly referred to as Tip-Over Challenge, a highly technical and extreme riding area.” 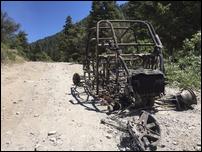 Three people were injured when a UTV exploded, sparking a wildfire in American Fork Canyon on July 23, 21016.

Despite their issued statement, Polaris has issued 300,000 recalls on their off-road vehicles, including one just a month ago for 19,000 ATVs due to a fire hazard.

Olson has some advice for anyone thinking of purchasing a vehicle.

The case will be litigated in Minnesota, the headquarters of Polaris.