SALT LAKE CITY — A new report regarding the competency of a woman accused of abandoning her newborn baby in a trash can has been completed.

However, attorneys in court on Monday asked for it to be kept under seal and an evidentiary hearing to discuss competency was set for Jan. 11, 2017.

Alicia Marie Englert, 24, was in 3rd District Judge Elizabeth Hruby-Mills' courtroom briefly Monday. Salt Lake County deputy district attorney Robert Parrish said the evaluation report ordered in June has been completed, though the judge said Monday she had not yet seen it.

Englert is accused of secretly giving birth in her Kearns bedroom in August of 2014 and then putting the newborn in a neighbor's trash can two days later while on her way to work. She was charged with attempted murder, a first-degree felony.

The baby girl was discovered by a group of walkers who heard her cries. The infant was taken to a hospital and restored to full health and later adopted by another family.

In February of 2015, Englert was found to be incompetent to stand trial. Prosecutors have asked that she be committed to the Utah State Hospital in an effort to restore her to competency so she can stand trial. Her defense attorney, however, believes the hospital won't take Englert because her IQ is below its threshold for treatment, arguing the woman may never be capable of facing the criminal charge. 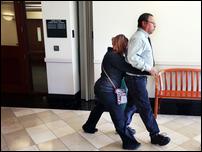 Another evaluation ordered for woman accused of leaving newborn in trash

A woman accused of abandoning her newborn baby in a trash can will face yet another competency evaluation before a decision is made about how to proceed with the case against her.

The Utah State Hospital's forensic department will only accept patients with an IQ of at least 70 for competency restoration. The defense says that since December of 2014, Englert's IQ has been consistently measured at 68, 65 and 64.

At Monday's hearing, a status hearing was also set for Oct. 24. While Parrish noted that he expects the January evidentiary hearing to take an entire day because of the number of witnesses, he also told the judge, without going into detail, that he hopes it won't be necessary to hold a hearing.

Englert and her parents only entered the courtroom right before her hearing, sitting in a conference room for about 90 minutes leading up to it. After the hearing, they surrounded her as she was led out of the courthouse, trying to avoid media cameras.

If convicted, Englert faces a maximum sentence of five years to life in prison.