SANDY — A postal carrier has delivered more than the mail to a Sandy boy, collecting shelves full of books for the child to read as his story has unexpectedly spread around the world.

Ron Lynch was delivering the mail when he spotted 12-year-old Mathew Flores fishing advertisements and newsletters out of a junk mail bin. The boy told the mail carrier that he was looking for something to read.

Reading, he says, is interesting. "Plus, it gets you smarter," he says.

"A young man was standing here reading junk mail and asked me if I had any extra," recalled Lynch, who works for the Sandy Post Office.

Struck, Lynch started a conversation with the boy. Mathew told the mail carrier that he reads the advertisements because he doesn't have books of his own and that bus fares made it difficult to get to the library.

If Mathew couldn't get to the library, Lynch decided to bring the library to him.

"I started reading at a very early age. My mother instilled a love of books in me," Lynch said. "At 12 years old, he didn't want electronics, he didn't want to sit in front of the TV playing games all day, the kid just wanted to read."

Lynch shared a picture of Mathew on Facebook, hoping a few of his friends would have some books to spare. The post spread worldwide, and even before Lynch arrived at Mathew's home Sunday with a box of reading material, strangers who had read the post had already sent their contributions. 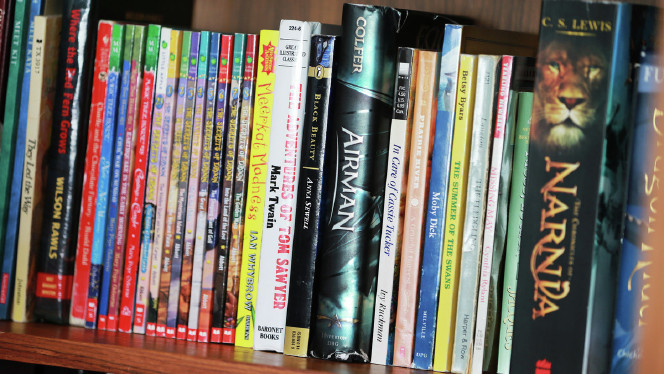 "It's gone crazy from there. I've heard from the U.K., Australia, from India," Lynch said.

Mathew's doorbell has been ringing for days as books have arrived.

"They said, 'These books are for you,'" Mathew said Sunday. "I thought they were mistaken, but they were for me."

He smiles as he promises to read every book, then share them with other children.