CHEYENNE, Wyo — Research out of Wyoming on car-versus-deer collisions gave the Utah Department of Transportation something new to consider.

They recorded a reduction in the number of dead deer and a change in deer behavior in those areas.

There were 65 percent fewer deer carcasses in the areas where they put a white cloth bag over the reflectors simply as a control for their test. The reflectors, however, were 32 percent more effective than the posts when they were covered with black bags, also part of the control.

"We certainly didn't expect to find something as simple as a white bag to be even more effective," said Riginos. In their findings, they "suggest that the white bags are more visible or reflective to deer than the red wildlife warning reflectors and are thus substantially more effective than reflectors."

They theorize the white color might alert the deer, much in the way they alert each other by flipping their white tails in times of danger.

"I think it's something about the moving light, the brightness of it," she said. "Even where we were doing this, the deer ultimately did cross the road, when there were no cars. It just made them more aware of the vehicles and less likely to run into the road in front of a vehicle and get hit."

Steering clear of deer is a big problem in Utah, too. 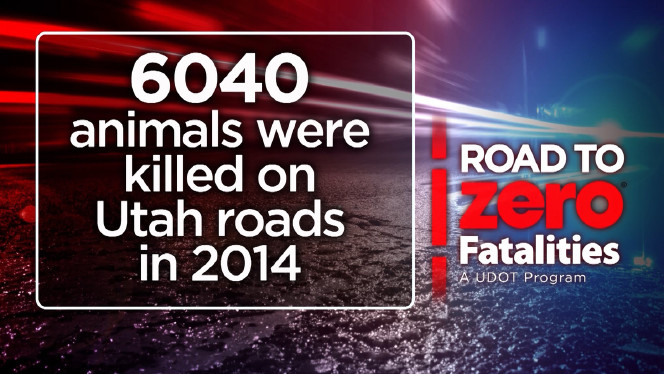 He's eager to learn more about it.

"If it proves to be an effective solution, it's something we would definitely be interested in trying," he said.

UDOT tracks areas across the state where the most car-deer collisions occur. US 40 between Park City and Heber City is one of those areas. UDOT built tall fencing along that stretch of highway that funnels the deer into underpasses, and away from traffic. Farther down the road, an electrified mat alerts the deer to stay away.

Last year, more than 6000 animals were killed on Utah roads — more than 5,500 mule deer and 150 elk. On average, a collision with a deer costs more than $2,500 to repair. The costs soar with injuries to the driver or passengers.

If a white cloth bag on a pole works well, UDOT is willing to try it.

"It's not a perfect solution," said Riginos, who plans more research. "But, it definitely suggests that we might be on to something good here."