DELTA — Suspected hate crimes against a Delta man who said he was attacked for being gay were actually staged by him, police confirmed Tuesday.

The man's attorney called his actions a "cry for help."

Rick Jones, 22, reported he was attacked in April while he was working at the Grand Central Station restaurant, which is run by his family. Jones said a gay slur was carved into his arm after he was knocked unconscious and beaten. The attacker also got away with $1,400 from the business' safe, Jones said at the time.

But Millard County Sheriff Robert Dekker said Tuesday that the assorted crimes were all faked by Jones.

"The investigation has come to an end today with the admission of (Jones) to having staged all of the incidents," Dekker said, adding that investigators are meeting with the Millard County Attorney’s Office to determine whether any criminal charges will be filed against Jones.

The sheriff didn't say what may have led Jones to admit that the crimes were a hoax.

"We urge community members to continue to be supportive of the Jones family," Dekker said in a statement.

Sheriff's deputies investigated reports that the Grand Central Station eatery was vandalized with threatening graffiti multiple times between April and June and that money was taken from the restaurant on another occasion. Deputies also investigated Jones' assertion that someone threw a rock with references to homosexuality written on it and a Molotov cocktail through his bedroom window on June 10. Jones reported he had to use a fire extinguisher to stop the blaze.

Jones also claimed he was hospitalized for a concussion following the April attack.

"I think someone is using this as psychological warfare against my family," Jones told reporters in June.

We urge community members to continue to be supportive of the Jones family.

Jones' attorney, Brett Tolman, said his client "is accepting responsibility for the incidents" and asked Tolman to contact the sheriff's office and have them cancel the investigation.

"At this point we are working with investigators and with the community at trying to point out and recognize that what this really amounts to is a very serious cry for help by an individual … who is gay and is in need of mental health treatment, which he is getting," Tolman said.

Those who participated in online and other fundraisers on Jones' behalf are all being refunded, he said.

"(The fundraisers were) not something that Rick started," the attorney said. "That was by well meaning persons that wanted to help out. But it was the appropriate thing to return those donations."

"I don’t think it was an intention on the part of our client to do anything criminal. I think this is truly a cry for help by someone that needs it," he said.

"At this point the most important concern is his well-being. … And while he’s acknowledging that this is something that he takes responsibility for, it still underscores some of the difficult and rough roads that those in the LGBT community go through," Tolman said.

Utah Lt. Gov. Spencer Cox, who earlier this month condemned the alleged attack on Jones as "cowardly and barbaric," said his reaction was mixed after learning that the assault was staged. 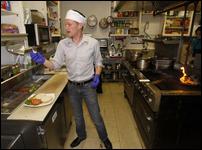 Police in this rural town say they are investigating hate crimes after a gay man was targeted in ugly cases of vandalism, burglary and assault.

"I am both relieved and saddened by the news today," Cox said in a prepared statement. "The original allegations were incredibly troubling and not representative of the love and compassion the people of Utah exhibit daily. I am proud of the overwhelmingly positive response and support from Delta and every corner of our state. Today, our concern is that the young man and his family receive the love and help necessary to find the peace and healing they seek."

Dozens of Jones' well-wishers from Utah's LGBT community traveled together to Delta after news reports surfaced and they bought pizza from the restaurant to show support for him and his family.

Terry Gillman, who helped organized the trip, said Tuesday he hopes the community will understand.

"I am saddened that this young man took such extreme measures to get help. … When someone sounds the cry for help we all need to answer the call. I am proud of the support this community showed and I’m extremely proud of the people who helped put the event in Delta together so quickly," he said. "I see no reason to shame or further subject this wonderful family to further persecution. I would hope and pray they grow from this experience together."

Tolman said he isn't worried about any backlash in the Delta community.

"I believe that those folks that have wanted to assist and help will also be the same ones that recognize what a difficult situation this is and want the best for Rick and for his family," he said.