“Neighbors know neighbors and look out for each other in Utah more so than in other states,” Wilkins said. “People here are very involved in keeping the community safe.”

Wilkins said crime rates are relatively low in Utah because there is not a strong gang presence, large pockets of “bad areas,” or a large percent of the population unemployed. According to the study, Utah has the fourth-lowest unemployment rate in the nation.

“Utah has a good economy, and areas that are less economically privileged are pretty widely dispersed,” Wilkins said. “We also arrest a lot more bad guys than average.”

Utah has one of the lowest driving fatality rates in the nation, according to the study. Sgt. Todd Royce of the Utah Highway Patrol said he and the UHP have been working to reduce the number of fatalities on Utah roads. 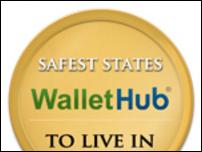 As much as we'd all like to point at a random spot on a map and decide to live there, relocating is unfortunately never that easy. And it shouldn't be.

“One fatality is too many,” Royce said. “Though we may have low fatality rates, when someone’s family member or best friend dies in a car accident, those statistics don’t matter.”

Royce said Utah has one of the lowest rates of drunken-driving arrests in the U.S. The UHP has also been combatting distracted and drowsy driving with education and stronger enforcement of existing laws, Royce said.

“One of the most important things motorists can do to say safe is to wear a seatbelt,” Royce said. “Only about 83 percent of the public wear seatbelts.”

A new law passed by Utah legislatures last month will give motorists caught without a seatbelt a warning for the first violation and a citation for every violation after that.

Natural disasters are also low in Utah. Utah has the third-lowest estimated property losses from climate disasters, according to the study.

Ranking above Utah in safety were Massachusetts, Vermont, Minnesota, New Hampshire and Hawaii.

Spencer Ricks is a KSL.com news writing intern and student at Dixie State University from Snoqualmie, Washington. Contact him at newsintern@deseretdigital.com.