Here's how grocery prices have changed in the past decade

SALT LAKE CITY — Ever feel as if a trip to the grocery store just keeps getting more costly?

We decided to track down the average cost of foods found in the kitchens of most American families, break those prices down by year and determine exactly how much more you’re paying today to keep your pantry and refrigerator stocked than you did 10 years ago.

Let’s start with milk. According to data from the Bureau of Labor Statistics, if you went to the grocery store today to grab a gallon, it would cost you around $3.46. That’s about 24 cents more than you had to pay 10 years ago, which doesn’t seem like too much of a jump, right?

In sticking with the dairy category, a dozen eggs run about $2.13, which seems reasonable until you consider the fact that you paid a whole dollar less for the same dozen eggs in 2005. 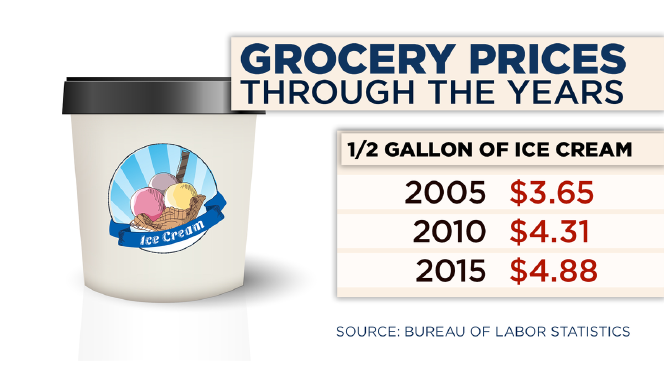 Moving on to grains. A loaf of wheat bread cost just $1.39 10 years ago. In five years, that price jumped 40 cents. Fast-forward another five years, and you’re paying $2.04 for that loaf.

Everybody loves spaghetti, in part because it’s pretty darn cheap. In 2005, a package of noodles cost the Italian lover just 95 cents. The good news is that spaghetti is still pretty cheap — the price has risen less than 40 cents in 10 years.

So what about meat? Notoriously some of the most pricey members of the now-extinct food pyramid, has there been much of a change in cost there?

While poultry has stayed fairly constant, ground beef is another story. This meat is a full $2 more a pound today, at $4.20, than it was in 2005.

Bacon is our representative in the pork department, running $5.36 a pound in 2015. That’s another increase of $2 over the past 10 years. So if you’re on a tight budget, stick with poultry.

And finally, an apple a day keeps the doctor away, and it won’t cost you too much to do so. In 2005 apples ran about 92 cents a pound, and today you’ll pay just 30 cents more. 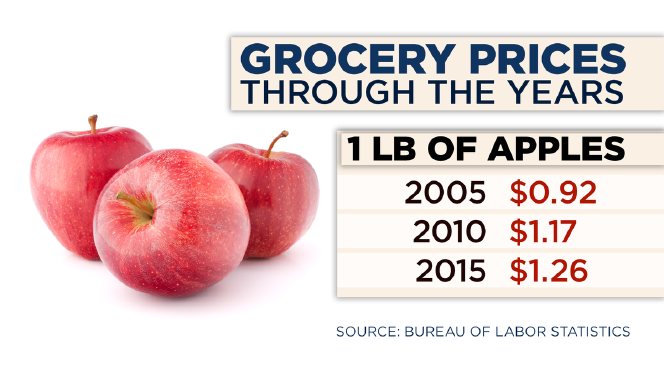 Overall, an average American family of four on a moderate-cost food plan spends between $890 and $1,062 a month on groceries, according to a USDA report.

That price range was $675 to $810 10 years ago — proving groceries really are costing us more money. But perhaps the increase isn’t as dramatic as it may feel in the checkout line.