SALT LAKE CITY — With roughly 490 bills awaiting his consideration, Gov. Gary Herbert indicated Thursday he’s “leaning toward” signing one of the most controversial pieces of legislation passed during the 2015 Utah Legislature.

HB11, which survived narrow votes in the House and Senate, would allow firing squad executions in the absence of lethal injection drugs.

During his monthly news conference, Herbert also discussed the progress of two major disputes that have yet to be resolved — the potential relocation of the Utah State Prison, and the failure to reach a compromise on Medicaid expansion.

The governor said about 30 bills are on a “watch list” as the executive branch takes the next 20 days to sift through the proposals. Herbert said a handful of them may warrant a veto, though he didn’t offer any specifics on which bills he may reject.

Despite a 6,200-signature petition that groups opposed to the death penalty delivered to Herbert's office Tuesday, the governor said Utahns have been “resoundingly in favor of capital punishment for the most heinous crimes.” He said the state needs a way follow the law and carry out executions if the lethal injection drug shortage persists.

“It’s not our preference, but we need to have a fallback so we can carry out the court order,” Herbert said.

He added that it’s not likely the state will use the firing squad because prison officials are taking “whatever steps are necessary” to get the drugs. Utah has only carried out seven executions in the past 41 years.

Herbert has until April 1 to sign the bill, though it’s uncertain when he will make the final decision.

The governor has called a special session to continue talks about relocating the Utah State Prison.

Grantsville city officials approved zoning changes Wednesday night in hopes of preventing construction of the new prison in the city — one of five potential sites the Legislature’s Prison Relocation Commission is now studying.

If the commission recommends a site that is better than the prison’s current Draper location, Herbet said the Legislature and executive branch will do what is necessary to place the new prison at the best possible location. 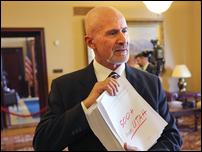 Gov. Gary Herbert received roughly 6,200 signatures Tuesday from people urging him to veto the bill that would reinstate Utah's firing squad as a backup execution method.

“We know that not everybody wants to have the prison in their backyard, so I expect (the committee's) search will try to find a place that has minimal negative impacts on the community,” Herbert said.

The commission has until Aug. 1 to make its recommendation to the Legislature. Herbert said he’s “confident” the Legislature and the executive branch will find a suitable location, whether that means the prison moves or stays in Draper.

Herbert said he was disappointed that the Legislature failed to compromise on Medicaid expansion. But the governor promised he and legislative leaders will reach a compromise by July 31.

“We put ourselves on a trajectory to resolve that issue,” Herbert said.

Herbert said he’s “very optimistic” that House, Senate and executive leadership will come up with a solution to address the concerns from all sides and come up with an affordable plan that will utilize the funds already being sent to Washington, D.C., under the Affordable Care Act, and cover Utah’s most vulnerable residents.

“We kind of just ran out of time in the 45-day session,” the governor said. “So we’re going into the extra innings now, and I expect that we’ll find a solution by this summer.”

Herbert said he hopes the group is able to create a plan that combines the two competing proposals. He also said he’s hoping to place a more definitive way to cap expenses so the plan is more sustainable.

Herbert also said he's concerned about the passage of HB396, the bill prohibiting wood-burning bans, saying the bill “seems to be a little bit of an overkill.”

While “only a handful” of Utahns own wood-burning stoves, Herbert said many more own Environmental Protection Agency-approved stoves, which still contribute to the state’s pollution in a significant way, he said. The all-out ban on wood burning “was a little short-sighted,” the governor said.

“So I’m going to take a really hard look at that,” Herbert said. “It’s not a matter of not having a wood-burning ban. It’s the matter of having the right wood-burning ban that makes some sense, that’s enforceable and that I think the public can embrace.”

With the passage of SB281, the Legislature established a state water infrastructure fund to start on a path to plan for Utah's water needs 50 years into the future.

Critics of the bill said the proposal was a way to push the controversial and costly Lake Powell Pipeline and Bear River Development projects.

Herbert said water will be one of the state’s leading development issues, and the question of how to fund the water projects still stands. He said the proposal was “a step in the right direction,” but more work will need to be done to plan for future water infrastructure needs.

“Water is going to be a No. 1 issue for us over the next generation,” he said.

Katie McKellar is a Dixie State University graduate with a bachelor of science in mass communication. Before interning at Deseret News, she reported and edited news content for Dixie Sun News, first as Photo Editor, then as Features Editor. Email: kmckellar@deseretnews.com