West Jordan 'not the place' for state prison, Mayor says

WEST JORDAN — Officials from West Jordan, joined by leaders from neighboring communities, expressed their concerns Friday about a proposed site for a new prison not far from the middle school parking lot where they were gathered.

"We're here today to paint a picture for you," West Jordan Mayor Kim Rolfe said. "A picture that shows a vibrant economic area with schools and homes located right near this area, right now."

Rolfe said the city has spent "countless hours" working with businesses interested in property adjacent to the site identified Wednesday as one of six possible locations for a new prison to replace the aging Utah State Prison in Draper.

Opposition has surfaced for all of the sites proposed for the $450 million project. The commission also adopted new criteria for evaluating the sites, including looking at the impact on economic development and community master plans.

The West Jordan mayor declined to name the businesses the city is courting, but said they could be worth hundreds of millions of dollars. Rolfe said there are already plans for housing developments in the middle of the prison site.

"Our community, like Draper, is experiencing good growth. We have some of the largest tracts of land remaining in the Salt Lake Valley," he said. "This really is the place for our state's future. It's not a place for a state prison."

"That's right," one of the dozens of residents holding signs protesting a prison in their community at the news conference shouted before the crowd burst into cheers and applause.

Our community, like Draper, is experiencing good growth. We have some of the largest tracts of land remaining in the Salt Lake Valley. This really is the place for our state's future. It's not a place for a state prison.

Maria Bingham, who lives east of state Route 111 in the Copperfield neighborhood located about a half-mile from the proposed prison site, told a reporter she and her husband were "just absolutely furious" when they heard West Jordan made the list.

"There's so much potential for economic growth and housing development that's just going to be flushed down the toilet. I don't know who would want to continue building out here," she said.

Bingham said she would be able to see a prison on the site from her back window and feared for the safety of her three children, who range in age from 2 to 10 years old, if inmates were housed nearby.

Her son Jackson, 10, said having a prison in his neighborhood was "stupid. Because if it was there, I wouldn't be able to see the mountains from my bedroom window." He said he also would be "just a lot scareder" of playing outside.

The South Jordan, Herriman and Taylorsville mayors also spoke out against locating a new prison in West Jordan, as well as Susan Pulsipher, vice president of the Jordan School District board.

Pulsipher said schools depend on property taxes, and a new prison in the area could slow the strong economic growth the district is counting to keep up with rapid enrollment growth.

Bryce Haderlie, West Jordan's interim city manager, said repeatedly officials appreciate the efforts being made by the lawmakers on the commission and "feel confident we can continue working with them."

Haderlie said he believes as commission members get more information about West Jordan's plans for the area, "they will quickly recognize this is not an appropriate place" to relocate the prison.

But Foxley, managing director of corporate recruitment and business services for the office, said while West Jordan is the "most active" of the sites under consideration, the state is working with local officials in all of the communities on the list.

She said it is not clear how much weight the commission will give to economic development in choosing a site for a new prison, but expressed confidence the office will have "a seat at the table" as the decision is made. 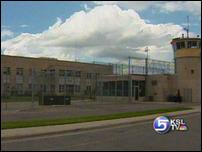 The governor has renewed the call to move the prison from the south end of the Salt Lake Valley, and Draper leaders say the time is right.

House Majority Assistant Whip-elect Brad Wilson, R-Kaysville, co-chairman of the commission, said all of the sites are currently getting another look from the state's consultant based on the new criteria.

"I don't know how those guidelines will affect (West Jordan) versus any other city," Wilson said.

The consultant is expected to report his findings to the commission at its next meeting on Dec. 22.

Wilson said the owners of the various sites, which include former presidential candidate Mitt Romney's son, Josh, and the family of the late Larry H. Miller, have "absolutely no impact" on the selection process.

"I don't think it should surprise anyone that individuals and companies that own 500 acres along the Wasatch Front have some connection to community leaders," Wilson said. "We'll treat them just like everybody else."

He said Josh Romney approached him late in the summer of 2013 about the project and was referred to the state Office of Legislative Research and General Council for more information.

"We didn't talk specifics," Wilson said. "I didn't know it was his site until it was ranked" according to the initial criteria adopted by the commission that weighted proximity to the current prison most heavily.

Jackson said he could not comment on how Josh Romney's involvement in the site may have influenced the selection process. Josh Romney did not respond to requests for comment.