SOUTH SALT LAKE — "Ignacio" said his teenage stepson would often receive phone calls at home and leave the house unexpectedly, sometimes not to return for a week.

"He used to sometimes receive a call, and he'd say, 'I'll be back.' And he wouldn't say with who or where or when. And we'd be like, 'Where he go?'" said Ignacio, who asked only his nickname be used to protect the identity of his stepson. "He didn't look at me seriously. (I would say), 'Hey, I'm talking to you.' And he would be like, 'Nothing, I was just with friends.' Many excuses."

It was only later — after more than three years — that Ignacio discovered his son was being forced to sell drugs and was likely sexually abused by Victor Manuel Rax, 42.

Rax — who prosecutors say was the mastermind of a sex and drug trafficking ring involving teen boys, mainly undocumented Latinos — was found dead of an apparent suicide in his Salt Lake County Jail cell Monday night.

Rax was discovered about 10:15 p.m. in his cell, clinging to life after an apparent hanging, said Salt Lake County Sheriff Jim Winder. Resuscitation efforts by jail staff were attempted, but Rax was pronounced dead in his cell a short time later.

Winder said Tuesday that "for some period of time" leading up to his death, Rax had been exhibiting "unusual behavior" in jail.

Statement by Utah Attorney General Sean D. Reyes
"Although any loss of human life is upsetting and Mr. Rax was presumed innocent, we are relieved that the 16 alleged victims, 15 of whom are children, will not have to face the trauma of testifying in criminal court proceedings. Moreover, while his guilt or innocence will now never be proven through the justice system, if he was guilty as we alleged, then we are comforted that many children and their families will live in fear no more. Mr. Rax's brothers are currently being held in the Salt Lake County jail and each of their charges will be evaluated on their own merit. We are currently assessing whether or not Mr. Rax's death will have any impact on the cases connected to those two individuals."

"Mr. Rax's behavior can only be described as bizarre over the course of the preceding few weeks here at the facility. When I say bizarre, it was very unusual and we were monitoring it. However, mental health professionals had had lengthy discussions with him and we had received what we believed were very qualified assertions that he would not attempt suicide. If we had those beliefs, he would have been in the acute mental health unit. So from my standpoint, we were taking very legitimate precautions," Winder said.

"We thought that he was doing well. We missed signs."

When asked to expand on how Rax was acting "bizarre," Winder said his behavior "wasn't the standard activity we see by inmates," and said Rax "was in a tenuous situation."

Rax, of Guatamala, had been moved several times back and forth between the jail's general population and an area reserved for suicide watch, Winder said. Monday night, he was in an area that was between those two. Jail officials would check on Rax every 45 minutes, he said.

Rax was arrested on Feb. 12. At the time of his death he faced 63 charges ranging from racketeering to sodomy of a child, sex abuse of a child, child endangerment and forcible sodomy. Spencer Austin, with the Utah Attorney General's Office, said the charges were based on 17 alleged victims, 16 of them children. But since Rax's arrest, others have stepped forward. He said prosecutors have now identified 34 potential child victims of Rax.

Ignaico said his stepson was 14 when he first met Rax, and was under Rax's control until he was 17. 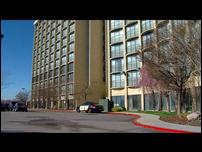 The Salt Lake arrests of two people accused of forcing a kidnapped Manhattan woman into a cross-country trek of prostitution highlight a 'prevalent' problem of human trafficking in Utah.

The teen was threatened to stay quiet or his family would be harmed. "It was hard for him to do it and keep quiet," his stepfather said.

At first, Ignacio said he only knew Rax by the name of 'Uncle,' because that's what all of his stepson's friends called him.

Rax gave Ignacio's stepson food, money and clothes. Sometimes he would leave the house wearing one set of clothes, and return wearing another. But Ignacio said his stepson would never tell him where he got his clothes or money. Eventually, Ignacio said he started following his stepson and watched him go to strange houses. He even gave him a smartphone with a GPS device inside.

"'Who lives in that house?'" Ignacio said he would ask his stepson later. "'Just a friend.'"

Rax is accused of trafficking teen boys for sexual purposes and then using fear to force them into sex and drug trafficking. Rax would "use proceeds from his criminal enterprise in the form of money, gifts, controlled substances and food as a way to groom the children to remain and/or return to (Rax) and eventually as a mechanism to overcome the will of the children in order to commit sexual offenses upon them," according to court documents.

When he started to meet that guy, he changed a lot. Sometimes when we were at home, he had his room organized. Sometimes he made fruit and things for us when we came out. Really nice kid. Later on he changed. He don't want anyone to tell him anything. When he needed to go out, he needed to go out no matter what. We tell him he don't have permission to go, and he's mad and he (was) dropping everything and hitting the doors.

Ignacio said the more involved his stepson became with Rax, the more his attitude at home changed. He said his stepson also started to act more paranoid.

"When he started to meet that guy, he changed a lot. Sometimes when we were at home, he had his room organized. Sometimes he made fruit and things for us when we came out. Really nice kid," he said. "Later on he changed. He don't want anyone to tell him anything. When he needed to go out, he needed to go out no matter what. We tell him he don't have permission to go, and he's mad and he (was) dropping everything and hitting the doors.

"He turned like a little bit aggressive. We get in a few times a couple of fights," he said. "It was a really bad situation at home."

Iganacio said he believes his stepson was also sexually abused, but he has never asked him, and his stepson only wants to talk to police about those questions.

"He talked to them. And when the police asked questions about it, he (felt) uncomfortable. He asked the police to take us out ... so we couldn't hear it," Ignacio said.

Today, Ignacio said his stepson is doing better and is getting help through therapy.

As for Rax's suicide, Ignacio believes it was the act of a coward.

"I'm not going to wish bad things for anyone. But I prefer he spend the rest of his life in jail instead of taking that way out. He preferred the easy exit. But there is nothing we can do. Some things happen for a reason."

South Salt Lake police and the Salt Lake County District Attorney's Office will investigate the death. The Utah Attorney General's Office said the investigation into Rax's alleged crimes will continue to see if there were others involved. Austin also encouraged potential victims to keep coming forward.

As for Rax's death, he said no one is happy about it.

"It's always a shock. There's never any happiness when someone takes their own life. But from the point of view from prosecuting the case, we have to be happy that the children are not going to have to take the stand and suffer the trauma of going through testifying, perhaps at a preliminary hearing as well as a trial," he said.

Winder concurred that the death of an inmate, no matter how horrendous the charges against them, should never be celebrated.

"From my standpoint, this is a tragedy. I know others in the community may feel differently because of the nature of his charges. But he is a human being who is in jail and the expectations should be that he or she walks out of here. So we are taking it seriously," he said.

Rax's two brothers, a half-brother and a full brother, were also arrested as part of the investigation. They remained jailed Tuesday on charges ranging from witness tampering to false documents. Winder said they were informed of their brother's death and were offered counseling.