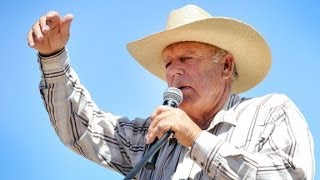 CLARK COUNTY, Nevada (CNN) — Cliven Bundy — the Nevada rancher turned conservative folk hero for bucking the federal government's attempts to stop his cattle from grazing on public land — admits he doesn't understand the bipartisan uproar over his comments suggesting blacks might have been better off under slavery.

But in a contentious interview Friday on CNN's "New Day," Bundy stood by his remarks, saying he's not a racist but only somebody who spoke his mind, perhaps using politically incorrect language.

"Maybe I sinned, and maybe I need to ask forgiveness, and maybe I don't know what I actually said, but when you talk about prejudice, we're talking about not being able to exercise what we think. ... If I say Negro or black boy or slave, if those people cannot take those kind of words and not be (offended), then Martin Luther King hasn't got his job done yet," he told anchor Chris Cuomo on Friday, adding, "We need to get over this prejudice stuff."

Bundy brought up civil rights leader the Rev. Martin Luther King Jr. and Rosa Parks, who was arrested in December 1955 for not giving up her seat on a public bus to a white man. The arrest sparked the Montgomery, Alabama, bus boycott.

In one exchange with Cuomo, Bundy said, "I don't know how to talk about these ethnic groups ..."

BUNKERVILLE — Armed militia members allegedly attended church in a local chapel for the Church of Jesus Christ of Latter-day Saints, upsetting the some members of the community.

Guns seem to be everywhere amid the controversy surrounding Cliven Bundy and the battle for grazing rights on federal land, and congregation members said some of those guns were inside the church where Bundy was worshipping on April 13.

Local reaction was mixed, but the showing of arms prompted a statement from a local spokesperson for the Church of Jesus Christ of Latter-day Saints, calling the display "inappropriate."

The armed presence has left even some Bundy supporters nervous, because they fear a faction is plotting a revolt.

"I'm a marine mom," said concerned Bundy supporter Vickie Mullen. "My immediate reaction was that they are trying to overthrow our country."

Mulled asked to be escorted to her car after her interview. And the paranoia cuts both ways.

One man agreed to an interview, then backed away after another man — who he referred to as "captain" — appeared to give him a "no" nod.

The sense of secrecy is hard to miss. But in front of the cameras, Cliven Bundy remains on message, a man on a mission to protect what he feels is his right to put cattle on this fertile plot of land.

"My answer is they do not own this land and they do not have a title to it. That Nevada is a sovereign state," Bundy said. "Let me tell you, I would pay my grazing fee to the proper form of government if I owed it."

Bunday's staunchest supports believe Bundy will prevail over the federal government. The militia members stand ready, and some have traveled across the country to show their support.

"Mr. Harry Reid is so upset about this that he may do something really stupid," said Bundy supporter Pam Derrick. "That's how come these men are here, to protect the Bundy family."

For two decades, Bundy's cattle have fed off government-owned land without paying grazing fees like thousands of other ranchers. He claims he won't do business with the federal government because, in his view, the Constitution doesn't say Americans can't use land owned by the federal government. He said he'd be willing to talk with state and local authorities..

"I'll be damned if this is the property of the United States. They have no business here," he said on "New Day."

"This is a sovereign state, the sovereign state of Nevada. The federal government has nothing to do with public land in Nevada." He said other ranchers are as frustrated as he is.

This stance made him a darling of some conservatives in the media and Republican circles upset over what they've deemed government overreach. Militiamen rallied by the side of the 67-year-old rancher as armed federal rangers tried to force him off his land.

Bundy won that standoff, but he didn't stop talking.

Speaking to reporters over the weekend, he recalled driving by a public housing project in North Las Vegas, Nevada, and seeing "at least a half-dozen (black) people sitting on the porch, they didn't have nothing to do."

"Because they were basically on government subsidy, so now what do they do?" he added in comments first reported by The New York Times and later seen on video. "They abort their young children, they put their young men in jail, because they never learned how to pick cotton.

The remarks have since gone viral, drawing widespread condemnation from Democrats and Republicans alike. The rancher said he doesn't feel "abandoned" by the uproar by the likes of right-wing radio firebrand and Fox News host Sean Hannity, who has ripped what he called the "ignorant, racist, repugnant, despicable comments."

"His remarks on race are offensive and I wholeheartedly disagree with him," said the Kentucky Republican, who's considering a 2016 presidential run.

Republican National Committee Chairman Reince Priebus, who had not weighed in on the land dispute, said Bundy's words were "beyond the pale."

I might be a welfare queen. But I'll tell you I'm producing something for America and using a resource that nobody else would use or could use. I'm putting red meat on the table.

On Thursday, in an exclusive interview with CNN's Bill Weir, Bundy was asked to elaborate on his remarks. He explained he'd been simply "wondering whether (blacks) are that much better off in the situation we're in now."

He backtracked somewhat, insisting he "didn't really mean it to compare (African-Americans' current plight) with slavery. I meant to compare it with maybe life on the farm or life in the South, where they had some chickens and the gardens, and they had something to do."

At the same time, Bundy stood by his general premise that blacks once had better lives — stating that, right now, "they don't have nothing to do with their children, their family unit is ruined. ... That's what I was referring to. I don't think they have the life that they should have" because of the government.

How did he arrive at these generalizations?

Weir at one point challenged the Nevada rancher about whether he was any more or less a "welfare queen" since his cattle have been feeding off the government, literally, by eating grass on public land.

Bundy's response: "I might be a welfare queen. But I'll tell you I'm producing something for America and using a resource that nobody else would use or could use. I'm putting red meat on the table."

CNN's Joe Sterling and Jason Hanna contributed to this report.