Tyler Haws vs. Delon Wright: Who is better?

SALT LAKE CITY — It's natural for many fans in the state to compare BYU players with Utah players — it's just the nature of the rivalry, no matter the sport. It just so happens that both BYU and Utah have the two best players in the state: junior guard Tyler Haws and junior guard Delon Wright, respectively.

So, who is the better athlete of the two?

While the topic merits discussion, it's important to remember the state is lucky to have two tremendous athletes, no matter the so-called victor. Both will likely be drafted by NBA teams and will be viable players for their respective teams. But, as with anything in sports, there has to be one winner.

Haws has been with the Cougars for three seasons (with a LDS mission in between his freshman and sophomore seasons), while Wright is a junior college transfer from the City College of San Francisco and in his first season with the Utes. Comparing the two in previous seasons is not fair based on different playing experiences. So for that reason, the discussion will only focus on this season's performances and will be based mostly on statistics.

There will be no discussion of conference opponents or talent in each conference. They're in different conferences, so let's leave it at that.

Haws was recently named the West Coast Conference Player of the Year for his “huge offensive games” and “increased role defensively,” head coach Dave Rose said. That award is no laughing matter. Any opportunity to be named a conference's best player is nothing short of greatness. Wright, however, will not likely receive such an honor — the Pac-12 has yet to name it's Player of the Year, but its unlikely Wright will receive that honor.

Haws and Wright are both listed as 6-foot-5 guards. But there is about a 20-pound weight difference, with Haws weighing approximately 200 pounds and Wright coming in at approximately 180 pounds. Physically, they are about as even as this comparison can get.

But let’s get to their offensive performances:

The West Coast Conference announced its all-league honorees on Monday, with BYU's Tyler Haws capturing Player of the Year honors, while teammate Kyle Collinsworth joined Haws on the all-conference team, and rookie center Eric Mika earned a spot on the all-freshman squad. BYU guard Matt Carlino was named as an honorable mention selection.

Simply looking at the respective player's stat line tells an interesting story. Haws does a great job of scoring, averaging a respectable 23.4 points per game. That average makes Haws the sixth best player in the country and best in the WCC in points per game. But Haws’ field goal percentage is 47.8 percent, making an average of 6.4 field goals per 16.2 attempts.

Wright, however, averages 16.4 points per game, but has a 60.4 field goal percentage, which makes him the 11th best in the country and best in the Pac-12. Wright averages 5.3 makes per 9.5 field goal attempts. Haws scores more points, but Wright is more accurate with his shots.

Looking to advanced stats, however, may provide a little more insight. Because most people are not experts in advanced stats, I will attempt to break them down throughout the process.

While both athletes have their respective strengths, Wright is the more efficient guard. Looking at the player efficiency rating, which takes into account offense, defense and the game’s pace, Wright is rated 28.6, while Haws is rated 23.8 — the average player rating is 15.0. But that stat alone is not a convincing metric.

Last, is the players offensive rating, which looks at the points produced per 100 possessions. Wright gets the advantage again, with a 129.2 rating. Haws comes in a close second with a 122.1 rating.

Additionally, Wright plays a greater role in steals and blocks for the Utes than does Haws for the Cougars. Looking at the steal percentage, which is an estimate of opponent possessions ending in a steal by the player while on the court, Wright gets 4.2 percent of the Utes' steals — 20th in the country and second in the Pac-12 — while Haws gets 1.6 percent for the Cougars. And in block percentage, Wright gets 4.1 percent, while Haws gets 0.9 percent.

Looking at a player’s overall defensive rating, which takes into account points allowed per 100 possessions, Wright is the victor. Wright gets a rating of 88.6, while Haws gets a rating of 107.5.

Both players mean a lot to their respective teams and are vital to each team’s success. But does one player have more of an impact than the other?

Looking at stats again to determine a player’s impact, Wright has more of an impact for Utah than does Haws for BYU. That’s not to say that Haws’ impact is not enough, because he’s been a tremendous asset to the program and is the best statistical player on the team. 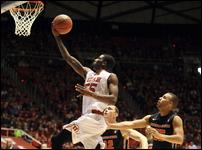 It's been no surprise to anyone that has watched the University of Utah basketball program this season that junior guard Delon Wright has tremendous talent.

Starting with assists, Wright averages 5.3 assists per game, while Haws averages 1.5. That number is magnified when looking at assist percentage, which is an estimate of teammate field goals the player assisted while on the court. Wright’s effect on the game is 27.9 percent, while Haws’ is 8.7 percent. However, when looking at usage percentage, which is an estimate of team plays used by a player while on the court, Haws’ usage percentage is 29.2, while Wright is 21.2 percent.

When looking at a player’s impact it’s important to see how many wins to which they have contributed. Once again, Wright is the victor, although Haws has also been effective in helping the Cougars win games.

While stats are not a complete indicator of all things basketball, it’s the best model we have to compare players. It’s understandable that either player could have an advantage in other aspects not related to stats, but for the sake of this argument stats will do. Based on the above statistical breakdown, Wright is the better athlete and has a greater impact for his team.