SALT LAKE CITY — It’s been no surprise to anyone that has watched the University of Utah basketball program this season that junior guard Delon Wright has tremendous talent.

Despite playing two seasons at a community college, Wright has adjusted to Division I basketball quickly and has been instrumental in helping rebuild a once down program. And throughout the short process, he has increased his chances for playing at the next level.

Wright joined the program in the summer of 2013 after playing two years at the City College of San Francisco. He was forced to go to community college after academics kept him out of Division I basketball.

However, academics would not keep Wright from showcasing his talent. While attending CCSF, Wright lead his team to the Coast Conference North Division Title with a 27-3 record. He averaged 10 points, eight rebounds and four steals per game and was named the Coast Conference Player of the Year and was selected All-State First Team.

Soon Division I schools noticed: Gonzaga, St. Mary’s, Washington, Washington State and Utah. And it was Wright’s versatility and size that was really attractive to Utah.

“He’s a real versatile player that just understood how to play the game,” Utes head coach Larry Krystkowiak says, reflecting on the recruiting effort to get Wright. “We needed some size — we were really small in the backcourt. I loved the fact that he was 6 foot 5 with the wingspan that he has, which provides us a lot more length on the perimeter.” 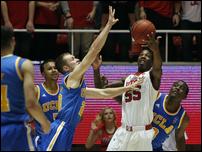 Delon eventually choose Utah because Krystkowiak had recruited him from the beginning and he knew he could have an immediate impact on the team. And he has quickly taken control over a team and fan base that welcomes the high energy player.

“It’s been great,” Wright says of his first year with the Utes. “I didn’t know what to expect. To finally get into a Division I level has been great. All the coaching staff and the fans have been real great — a great process.”

With only seven games left in the season Wright has had a great season statistically, with almost every statistical category ranking him in the top 15 in the Pac-12. He averages 16.1 points (eighth), 7.0 rebounds (12th), 5.29 assists (fifth), 2.81 steals (second — fifth in the NCAA) and 1.29 blocks (eighth) per game, all while shooting 59.2 percent from the field (fourth).

“It’s been a bright spot for us. He hasn’t even been here for a year,” Krystkowiak said. “A lot of times for junior college kids, it takes a little bit of an adjustment going from one program into the next. He’s done a really good job fitting in with our plan. Statistically he’s doing a really nice job in a lot of different categories for our team league wise.”

“It’s great for us for him to fill that stat sheet up,” sophomore guard Brandon Taylor says. “It’s just good to have that player on this team.”

He's a real versatile player that just understood how to play the game. We needed some size &mdash; we were really small in the backcourt. I loved the fact that he was 6 foot 5 with the wingspan that he has, which provides us a lot more length on the perimeter.

Much of Wright’s drive, though, comes from not wanting to be overshadowed by his older brother, Dorell Wright, who currently plays for the Portland Trail Blazers. At Leuzinger High School in Los Angeles, Wright made the varsity basketball team his freshman year, and many of his classmates said it was because of Dorell.

“I played varsity towards the end of my freshman year, and a lot of kids would say I’m only playing varsity because my brother went to the school and he helps out the program,” Wright told the San Francisco Examiner two years ago. “They were pretty much hating on me and I just used it as motivation to become a better ballplayer.”

Wright has no problem proving his talent now. In fact, he says he could easily beat Dorell in a one-on-one match if they played today.

“Yeah, I could actually. He knows that too,” he says of his chances against his older brother. “We played a couple of games and I killed him.”

Nevertheless, Wright says he still listens to the advice his brother willingly gives him.

“He watches my game; he tells me what I need to do better, what decisions to make,” Wright says. “He knows what he’s talking about so I have to listen to him.”

Where Wright’s path is headed is still uncertain, but his potential to shine at the next level is starting to be showcased. But Wright says he’s not too worried about that right now.

“I just worry about right now. If that time comes this year or next year I’ll focus on it then, but we’ve got to get some wins,” he says. “Right now I’m not really focused on it.”

And that’s exactly what Krystkowiak hopes to see from one of his players. “There won’t be any NBA talk coming out of my mouth,” Krystkowiak says.

But one thing is certain, Utah is happy to have Wright for as long as he’s with the program.