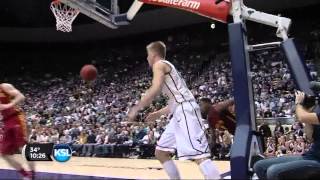 PROVO — BYU junior guard Tyler Haws was very busy last week. Not only did he lead the Cougars to back-to-back home victories over Pacific and St. Mary's, he managed to average averaged 35.5 points, 4.5 rebounds and 2.0 steals in the process.

Despite being the focus of every opponent BYU plays, Haws seems to find a way to rise to the occasion. Through 24 games, Haws is averaging 24.6 points per game (third best in the nation), while shooting 47.8 percent from the field and 46.5 percent from three.

"I'm feeling good," Haws said after Saturday's victory. "I feel like I've found my rhythm ... I've got to give credit to my teammates and the coaches; they're calling my number. It's nice to see shots falling."

After Saturday's win over St. Mary's, Gaels Head Coach Randy Bennett was asked if Haws is the WCC Player of the Year. "He'd get my vote," Bennett said.

It's not debatable that Haws is the conference's best offensive player. Besides what he did against the Tigers and Gaels, Haws has scored 142 points during the past two weeks.

"He's on a really nice roll ... it's almost like when he has a 7-for-14 night, you go, what's the deal, why are you missing those shots," Dave Rose jokingly said. "Right now he's in a real groove; when he gets open and delivers the ball, you're surprised when it doesn't go in because they're all going in."

With only seven games left before the West Coast Conference Tournament in Las Vegas, BYU knows it has to continue to play at a high level. With games against Gonzaga, St. Mary's and San Francisco, among others still on the schedule, Haws says that the Cougars can't let their foot of the gas.

"Anything can happen in this league; we've seen weird stuff happen all the time. You've got to just focus on one game at a time, you can't overlook anyone ... just be ready to play every night."

The good news for Haws and the Cougars is that four of the next seven games will be played at the Marriott Center, a place where BYU is 10-1 this season.

Up next for the Cougars is Thursday night's home game against the Santa Clara Broncos. The game will get underway at 9:00 p.m. MT. You can hear all the action beginning with pregame coverage at 8:00 p.m. MT on the NuSkin Cougar/IMG Sports Network (KSL Newsradio 102.7 FM/1160 AM and BYU Radio, SiriusXM 143) as well as byucougars.com and KSL.com.