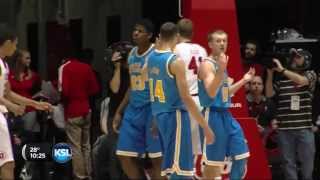 Wright, a 6'5" guard, put up big numbers last week as the Runnin' Utes got wins over the USC Trojans and the No. 25 UCLA Bruins. Wright scored 22 points in Utah's 84-66 win over the Trojans, adding six rebounds, six steals, five assists and two blocks.

He followed up Thursday's performance with 12 points, eight rebounds and six assists in Utah 74-69 win over the Bruins.

Wright continues to have a great season as one of the most consistent players on the Utah roster. He currently leads the Pac-12 in field-goal percentage at 63.5 percent (20th nationally) and in steals (sixth nationally). Wright is also in the Top 15 in the conference in blocks (fourth), assists (fifth), scoring (sixth) and rebounds (12th).

Wright is the second player this season to win the award from the Pac-12, joining sophomore Jordan Loveridge, who won it earlier in the season after his performance against in-state rival BYU and Idaho State.