Parents describe rising above 'the deepest hole' of grief after shooting

10PM: Parents describe rising above 'the deepest hole' of grief after shooting

630PM: Rising above 'the deepest hole' of grief after shooting 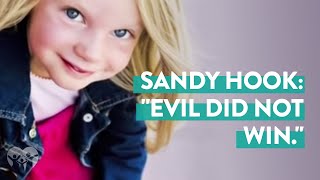 NEWTOWN, Conn. — One year ago, Alissa and Robbie Parker lost their daughter Emilie in the tragedy at Sandy Hook. With the help of their faith, they've been able to move forward and find moments of peace through writing, service and trying to make every school in America a safer place.

Dec. 14, 2012 was a dark day in American history. The tragedy at Sandy Hook took the lives of 27 people, including 20 first-grade students. Alissa said on that day she "fell into a hole."

"This was the deepest hole I had ever been in," Alissa wrote on her blog in January 2013. "I tried to look up and see a way out, but I could barely see any light. I felt this enormous pain inside as I realized a piece of me had been taken away forever all by one person's evil act."

But Alissa said she had a choice — she could stay in the hole or she could, through her faith, find a way to rise above the grief and have the strength to move forward — not on, but forward. That's when she and other mothers who lost their children at Sandy Hook decided to start Safe and Sound, a foundation to help other schools become safe.

"Me and some of the other moms felt very strongly that there was a lot to improve in school safety and we didn't feel like anyone was talking about it," Alissa told KSL.com. "We felt strongly that we wanted to use our voices to make sure that schools had the proper security in place."

Alissa and the moms she was working with developed tool kits for schools to help administrators, teachers and parents through the process of making their schools safe. In addition to the information kits they have produced, they also speak across the country about school safety, trying to help prevent tragedies like Sandy Hook.

"We've also been out speaking to different organizations about school safety, trying to take what we learned about the event at Sandy Hook and be able to move forward and teach people about the lessons that we learned," Alissa said.

The cold outside Peery's Egyptian Theater in Ogden Friday evening was enough to freeze you in your tracks. The performance inside, however, just might melt your heart.

"It's good people doing good things for a good cause," said Jill Cottle Garrett, as she watched part of the ballet from the back row.

Jill Garrett was also at the performance because of her connection. She's the aunt of Emilie Parker, the 6-year old girl who was killed in the Newtown, Connect., school shootings last year. Parker's family is from Ogden.

The performance and a few others, will help raise money for the Emilie Parker Art Connection memorial fund.

That would have been hard to say last December.

"It's hard to believe a year has gone by because it feels like it was just yesterday. It's so real and vivid," Garrett said.

Before she died, Emilie was hoping to come to Utah to see her cousin dance in The Nutcracker.

"Last year, all she would talk about is her coming to see me do The Nutcracker, and so when she died, everyone wanted to see me dance because they knew how much it meant to her," said Claire Garrett, Emilie's cousin.

After Emilie's funeral , her whole family went to the Egyptian Theater, to see the performance. They said it's what Emilie would have wanted.

"It helped us, and so our family kind of became connected to The Nutcracker production," said Jill Cottle Garrett.

"We're fortunate as the family left the funeral to be able to have them come and do a performance and here," said Imagine Ballet Theater founder Raymond Van Mason. "I would have loved to have her here if she would have been here."

For the 2013 Imagine Ballet Theater performance, they wanted to donate some of the money raised from The Nutcracker to the Emilie Parker Art Connection memorial fund.

"It's a way to keep her memory alive," said Van Mason.

Dancers from the performance autographed a copy of a picture Emilie drew for a fund-raising raffle.

"I think it will be a chance for people to see her art and know who she was and what she loved to do," said Claire Garrett.

"Emilie was an artist in every sense — she loved to draw, but she also loved to dance and music, and just anything creative," said Jill Cottle Garrett. "And so this is just a beautiful connection to her art and dancing and visually what she would create.

Despite the tragedy, her family said "evil didn't win."

"She is living still through all of us and through her memory and the joy she gave us," she said. "It's truly remarkable that it didn't take her goodness away, even though it took her away."

A raffle will be held each day of the performances and the winners of the art raffles will be announced on Dec. 21st.

Alissa said she has found strength and motivation from the positive feedback she gets from the Safe and Sound program.

While they have been able to find the strength to move forward, Robbie said their grieving process is still on-going and some days they don't have the strength to get up and get out of bed. But when they need the help, they are blessed with the outpouring love and strength from others that helps them get through that bad day.

"A lot of people look at it as though grief is some sort of a check-off box," Robbie said. "But it's something that you continually work on every day."

"Sometimes you find (the strength) and sometimes you don't. And when you don't, it's amazing to see the support that's there to help you."

Alissa has found it cathartic to write on her blog, The Parker Five. She said it's been a rewarding experience to develop relationships with other people who have experienced their own heartbreaking tragedies and that they find "strength and power" from each other.

While they don't usually like to share their story with a lot of people, the Parkers recently made a video describing their journey from the past year by Shadow Mountain, the production company that makes "Mormon Messages". When they first approached Alissa and Robbie, she said they felt very strongly that they should participate in this project because they felt Shadow Mountain's motive was "pure and would be done with sweet intent," to share an inspiring message of hope.

"They really helped us through this process and they told a beautiful story," Alissa told KSL.com. "We were very grateful with the sensitivity that they had in honoring our daughter and when we watched the video and that's the thing that resonates with me the most is I see so much of her in it ... for a mom that's very touching and very rewarding."

Alissa and Robbie have several projects in the works to honor Emilie, including one in Ogden, where they used to live. They have partnered with Imagine Ballet to help sponsor its production of the Nutcracker. In return, Imagine Ballet is going to donate some of their proceeds to the Emilie Parker Art Connection, a program they developed to help kids express themselves through art just like Emilie loved to do.

Imagine Ballet also gave the Parkers 40 tickets to see the production, which they in turn were donated to local Utah kids so they could see and experience the ballet for themselves, a production that Emilie "adored."

And while she still has dark and difficult moments, Alissa said she's never blamed God for what happened to her daughter.

"When this happened, I understood how it worked and I understood how accountability worked and the power that we all have inside of us to choose right from wrong," Alissa said. "The loss of my daughter and missing her and grieving. ... That missing piece of me was very difficult, and still is obviously, but as far as blaming God, that was never difficult for me."

After spending time serving underprivileged children in Guatemala earlier this year, Robbie, who is a physician's assistant in a NICU, says he has a greater understanding of the love every parent has for their children.

"I know how much Emilie meant to us and how special she was to us and I started to realize that it's like that for every parent everywhere on this planet," Robbie said. "It doesn't matter where you come from or how meager your life is or how extravagant your life is, when you have a child that's brought into your life, that is the most important and special thing that can happen to you."

For more information on how you can help honor Emilie, visit the Emilie Parker Art Foundation website.