COTTONWOOD HEIGHTS — KSL investigative reporters helped a single mother after she allegedly received multiple eviction notices due to noise complaints about her son with autism.

Virginia Emery moved into a Cottonwood Heights apartment complex with her two young sons in September 2013. Emery said that almost immediately after moving in, she started receiving eviction notices from the apartment management. The apartment manager allegedly told Emery that there was too much noise and that neighbors had filed complaints.

However, Emery said the source of the noise was her 7-year-old son who has autism.

"There's been times he's thrown a tantrum, it's never been at night," Emery said. "Or he'll shut a door too loudly — he'll forget."

Emery said when she moved into the Pinnacle Fort Union Apartments, she told the manager about her situation right from the beginning.

"I told her my little boy has autism and she said, 'That's no problem,' " Emery said.

However, Emery said she received a noise complaint from a neighbor the day after she moved in. Within a week, she allegedly got a 3-day notice to comply with the noise complaints or that she would have to move out. Virginia said she and her sons tried to be quiet, but they soon got a 10-day eviction notice for being a "nuisance."

"It bothers me a lot because it's like they're calling my son a nuisance and my son is not a nuisance at all," she said. 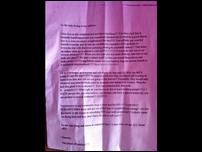 A Canadian mother was dismayed after receiving an offensive letter from a neighbor complaining about her teenage son who has autism.

Emery said she offered to move to a different apartment, but management said 'No.' In a final attempt to keep her apartment, Emery said she asked an autism advocate to speak with the manager, and it worked.

"Everything was okay and I said, ‘Should I be expecting a new eviction notice?' " Emery said in a conversation to the apartment management. " 'No, no Virginia, absolutely not. Everything's OK.' "

However, Emery said she received another eviction notice a few days later, and her family was allegedly informed they had had just three days to move out. She contacted KSL and an investigation took place. Reporters talked to the Utah Labor Commission. The Utah Labor Commission helps to enforce the Fair Housing Act. Representatives said Emery could have a case.

"You have the neighbor who has the right to enjoy a quiet home environment," said Fair Housing Manager Dan Singer. "But you also have this individual with a disability. And we'd want to know if other people that have been noisy, are they given notices to vacate right away?"

Luckily for Virginia, the complaints never got to the point of eviction. Hours after KSL talked to the Pinnacle Fort Union Apartments management, Emery received a message on her voicemail that was allegedly from the apartment manager.

When you're a mom and you're in charge of making sure your kids have a place to live and food to eat and everything, that was a big weight on my shoulders.

"We are withdrawing all of our notices," the message said. "You are OK to live on the site. We don't want to move forward with any further evictions."

Emery said she was very relieved when she received the message.

"I just started bawling. When you're a mom and you're in charge of making sure your kids have a place to live and food to eat and everything, that was a big weight on my shoulders," she said.

The lawyer for the Pinnacle Fort Union Apartments said they had no comment except that they had just found out that Emery's son was autistic.

The Utah Labor Commission has asked any renter who thinks they have been discriminated against to contact them.