RIVERTON — Leaders in the Jordan School District had residents vote on a way to come up with the $1 billion needed to pay for 19 new schools and announced the results Tuesday.

For a month, the district asked for feedback. Cards were sent out to residents telling them 29,000 more students are projected to be in the district over the next 10 years. However, there aren't enough schools to educate them so more schools will need to be built.

"So you stay and deal with it, or you leave," said Gina Sipos, a South Jordan resident.

Sipos is one of about 100 Jordan School District residents who attended a meeting Tuesday during which the results of a survey were announced. The district asked residents how they want to pay for new schools.

"We need our taxpayers and our patrons to help us answer this question," said Patrice Johnson, superintendent of the school district. "How are we going to handle this growth?"

Almost 8,000 residents took the survey, which is nearly 10 percent of district residents. Of those residents, 80 percent favored taking out a bond to pay for the schools.

Either way, the school district says the growth in the southwest part of Salt Lake County will continue and it has to find somewhere to educate tens of thousands of new students. 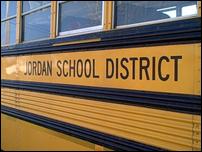 Nail guns and wood saws can be heard all day long in Herriman's south side. Home construction seems to be a booming business once again in this small city in the southern part of the Salt Lake valley.

Sipos said she wonders why cities continue to issue building permits without having enough schools. Cities get impact fees, but state law doesn't allow school districts to benefit from them.

"The cities are kind of greedy and let's see how many people we can get into the cities without any thought as to where we are going to put all these kids," she said.

A lot of new homes, condos, and apartments are being built in South Jordan, West Jordan, Herriman, Riverton and Bluffdale. New schools are being built now, but the district says they are already full by the time they open.

The district board is expected to make a decision in July or August.