Teen accused of killing 2 brothers will remain in custody

5PM: Teen accused of killing 2 brothers will remain in custody

FARMINGTON — A 15-year-old boy arrested for investigation of murdering his two younger brothers will remain in custody at the request of his attorneys.

"The judge extended the timeline for the county to file charges another two weeks," Utzinger said. "I think the county has tentatively reached a conclusion about what they want to do, but they agreed to give us some additional time to provide input before they make that final decision."

Alex Vidinhar, 10, and Benjie Vidinhar, 4, were found dead in their West Point home May 22 with wounds consistent with a stabbing. They had been left in the care of their 15-year-old brother, who was later arrested on suspicion of murder.

At a hearing on May 31, attorneys on both sides of the case asked that the teenager remain in custody to allow prosecutors to have additional time to receive and review evidence in the case. Utzinger said he requested the second extension Friday to allow for continued discussions with prosecutors.

The Davis County Attorney's Office will determine what charges to file and whether to file charges against the teen in juvenile court or adult court. 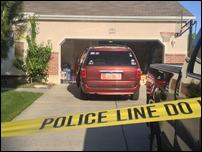 Deputies in Davis County searched for a 15-year-old boy for several hours Wednesday night after his two younger brothers were found dead in their home. The teen was located just before midnight.

"Both sides are trying to handle it very carefully, because of the nature of what happened and how young the suspect is," Utzinger said. "We're grateful the county attorney's office is giving us some additional time to try to provide input before they make their final decision about what charges to bring."

He said he anticipated that his client's detention review next week would be uneventful, but that charges would likely come the following week.

The boys' father has said he does not want his teenage son tried as an adult or to face a potential sentence of life in prison without parole. He said the family "never imagined something like this could happen," and believes emotional or mental health issues may have played a role in the tragic incident.