'If you don't wear your seat belt, wear it,' says accident survivor

SALT LAKE CITY — Clint Leary believes he started to wear a seat belt just in time to save his life.

"I didn't have time to think about nothing," he said about the crash that could have killed him last October. "It was wicked."

He rolled his new pick-up truck with his best friend and his son on board.

"I was so scared, and I was so thankful when we stopped," Leary said. "I reached back and touched my son and asked him if he was okay, and my friend, Pete. It was very, very emotional."

According to the Utah Highway Safety Office, most of us wear seat belts when we are in the car. In fact, a 2012 study shows 81.9 percent of Utahns regularly buckle up. The numbers also indicate that those who don't wear seat belts are 40 times more likely to die in a crash.

Last year, 67 Utahns who were not buckled up died in car crashes. That's nearly one-third of Utah's 215 highway fatalities in 2010.

Clint Leary is thankful that he changed his habits several months before his crash.

Last fall, he left his home in North Salt Lake with his son, and his best friend, Pete Albrecht. They were headed up I-80 in Parleys Canyon for an antelope hunt in Wyoming. But, the never got there.

It was raining all across the Wasatch Front, and there was a downpour in the canyon.

"The truck drifted a little bit to the left, and I think what we hit was a wall of water that come across the road," he said as the pick-up passed the exit for East Canyon. "We hydroplaned, and I had no control of the truck."

His closest friend and co-worker, Albrecht, was sitting next to him in the Ford extended-cab pick-up.

"It came with such force that I knew it was going to be bad," Albrecht says.

They feared they would roll into oncoming traffic.

"It just careened into the jersey barriers," Leary said. "We went up and over, and rolled.

Leary said that the air bags deployed as glass, mud, and hunting gear tumbled around the cab.

"We felt like we was in a washing machine."

When the truck stopped rolling, it came to rest upright out in the median. Leary said the damage was pretty bad. The truck was totaled, bu the men were alive. 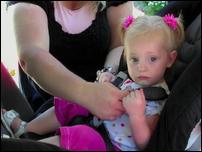 Major cause of traffic fatalities: not wearing seat belt

The most preventable type of traffic fatality in Utah is killing the most people. Last year, 270 people died on Utah's roadways. Most of them died because they weren't wearing seat belts.

"To be conscious, to be alive, it was unbelievable," Albrecht said.

"It was a life-changing experience, and I felt so thankful to be alive and not hurt," Leary said.

Leary had reminded his son to buckle up just moments before, and only started wearing his seat belt months before.

That is, until he bought a truck that beeped at him incessantly until he clicked the belt into the buckle.

He wrote an email to all of his friends, urging them to buckle up every time. He grew up in rural Utah, riding in a pick-up, not wearing a seat belt. The 2012 study shows he's not alone. People in rural areas of Utah use seat belts the least in our state. For those in rural areas who ride in pick-ups, only 55.6 percent buckle up regularly.

Leary urges everyone to learn from his experience.

"If you don't wear your seat belt, wear it, because it saved our lives."

When used correctly, Utah Highway Safety Office statistics show seat belts reduce the risk of death by about 50 percent. Each year in Utah, more than 100 lives are saved because they were wearing their seat belt.

Leary and his passengers are among that number.