PROVO — A man accused of beating another man with a baseball bat has been arrested and booked into the Utah County Jail.

Richard Gutierrez, 22, was arrested Saturday for investigation of aggravated assault.

About 1 a.m., Gutierrez got into a fight with a 57-year-old man, possibly over something drug-related, in the street near 245 W. 400 North, said Provo Police Sgt. Brandon Post. He allegedly used a baseball bat to hit the man in the mouth and the back of his head. 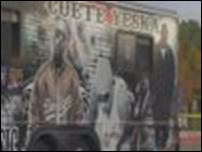 A shooting in the parking lot of a convenience store left one person injured.

The victim lost several teeth, and required multiple stitches in his face and the back of his head, Post said.

Witnesses told police Gutierrez had several distinctive tattoos, including a Playboy bunny on his left cheek. Investigators immediately knew whom the eyewitnesses were talking about when they heard the tattoo descriptions, Post said.

Detectives were able to track down Gutierrez at his house where his family initially told officers he wasn't home, but Gutierrez eventually came out and surrendered, according to the sergeant.