WEST JORDAN — Criminal charges have been filed against two 20-year-olds who police say released a pepper spray-like substance inside a Walmart, injuring several shoppers and resulting in the evacuation of the store.

Jordan Ryan Crane, of Herriman, faces single counts of causing a catastrophe, a second-degree felony, and obstructing justice, a third-degree felony, as well as four counts of surreptitious administration of substance, a class A misdemeanor.

Madison Valorie Durrant, of Riverton, has been charged with obstructing justice, a third-degree felony.

Police say Crane and Durrant were inside the Riverton Walmart, 13502 S. Hamilton View Road, on Sept. 15 when Crane removed a canister from Durrant's purse and sprayed it in the direction of another man who entered the store with them, according to charges filed Wednesday in 3rd District Court. 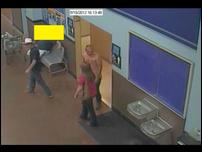 Hazmat crews evacuated a Walmart on Saturday afternoon after a pepper spray-like irritant was released in the store, police said.

Video footage shows Crane spraying the canister at various locations inside the store. The man held the canister down at his side to hide it and would spray it behind him as he looked around, charges state.

Approximately 80 Walmart patrons and employees were treated at a triage station set up outside the store, including 36 who complained of irritation of the throat and/or eyes. Three people were transported to an area hospital for further medical treatment, and another victim drove herself to a hospital, the charges state.

Durrant told police that Crane took the "jogger spray" from her purse and sprayed it "two or three times." Crane told police he sprayed the canister no more than five times and witnessed at least one person coughing because of the spray, according to the charges.

Police say Crane threw the canister out the window of Durrant's car somewhere along Bacchus Highway (state Route 111). Media reports showing surveillance video photos resulted in tips that led to the arrests the same day of the incident.