The poll was conducted the week of the presidential debate - October 2nd through 8th. It shows Romney leading 49 percent to Pres. Obama at 47 percent. Gallop says its calculation of likely voters is based on registered voters' responses to a seven-question series.

Another recent Gallup poll shows one demographic where Romney not only beats the president, but tramples him by a six-to-one margin: Mormon voters. However, contrary to the stereotype, not all Mormons vote Republican.

For some LDS faithful, it may be the excitement of seeing a fellow Mormon on the national stage that prompts them to support Romney.

But some college students — and self-proclaimed Democrats — say their vote has nothing to do with religion.

"It bothers me that people will think that because I am Mormon I support him," said BYU sophomore Hannah Wheelwright.

Sporting an Obama 2012 T-shirt, the BYU sophomore and member of the president's LDS outreach committee in Utah is doing everything she can to help defeat Romney. And with those efforts come questions.

I've definitely had questions of personal worthiness. Am I still able to go inside the temple because I support President Obama? I've been asked that by several BYU students.

"I've definitely had questions of personal worthiness," Wheelright said. "Am I still able to go inside the temple because I support President Obama? I've been asked that by several BYU students."

The short answer is that she can. And so can Ben Ader, a Mormon and a Democrat. He says religion and politics don't always mix.

"There's automatically that identifying factor that because we have a similar faith we're going to have a lot of the same characteristics when it comes to policy decision," Ader said.

But Ader said his views are polar opposite of those of Romney.

"It has a lot more factors than religion," he said.

That may be true for Ader, but according to a recent Gallup poll, 84 percent of registered Mormon voters said they would vote for Romney.

"I think it comes from the misunderstanding that Mormons can't be Democrats," Wheelwright said. "I've met people who've said, 'Wow, you're a democrat? You're the first Mormon Democrat I've met.'" 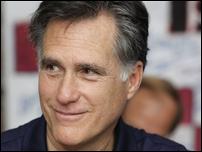 Actually, it was when Hannah Wheelwright came to BYU that she discovered she was a Democrat. She says her parents are both very conservative.

"I think there is a generational gap in the church where these young people are being brought up more open minded," she said. "There's more of an emphasis on learning to live in the world and how to relate to people of other faiths. I think that is causing the Mormon church to be a little more open minded and people being more open to joining political parties that they at one point cast off."

What both of these Democrats say they appreciate is that the LDS Church stays out of the political fray in this case and does not endorse any candidate, allowing them and others to make their own political decisions.