SALT LAKE CITY — Gov. Gary Herbert said Thursday he's decided against appointing someone from EnergySolutions to the state board that oversees radioactive waste disposal, citing the "appearance of a conflict of interest."

"If I wasn't running, do you think a lot of these issues would have been brought up?" Cooke asked at a press conference on the steps of the Capitol. "Who's the watchdog? Who's questioning?"

At the taping of his monthly news conference on KUED Channel 7, the governor said he still supports requiring industry representatives to be named to regulatory boards because of the expertise they bring.

Earlier this month, Herbert said he was reconsidering a controversial appointment of an EnergySolutions executive to the Radiation Control Board, given a legislative audit that found oversight of the industry lacking.

A day later, his nominee, Dan Shrum, senior vice president of regulatory affairs for EnergySolutions, withdrew his name from consideration. A company spokesman said the controversy over the appointment was a distraction.

EnergySolutions employee won't be on Radiation Control Board

Critics who assailed the pending appointment of an EnergySolutions employee to the Radiation Control Board are pleased his name has been withdrawn, but said Thursday it is only one step on a long path of reform necessary in oversight of the industry.

Herbert said Thursday the difficulty with filling the industry representative slot on the board is that EnergySolutions is the only company in Utah that deals with radioactive waste disposal, "so having somebody from that specific industry on the board is somewhat problematic."

The governor said he now is looking at other alternatives, including appointing a representative of the radioactive waste industry from out of state. He also said he'd see if any changes need to be made in the law requiring an industry representative on the board.

"I think there are some other ways to go that would be better, that would be more transparent and that will avoid any kind of an appearance of a conflict of interest," Herbert said. "The appearance was causing me some problems."

The governor said he is also reviewing the Legislative Auditor General's audit of the regulatory oversight of the state Division of Radiation Control that found the agency was too dependent on self-reporting by EnergySolutions.

The state, he said, needs "to make sure we are doing everything we can to protect the public's health, safety and welfare."

The governor began his news conference by asking Utahns to help out those who are unemployed or living in poverty rather than rely on government to solve their problems. 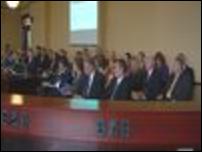 On Tuesday, the Utah Senate President suggested that the state fire the top radiation control official because of lax oversight at the EnergySolutions radioactive waste landfill. His comments followed a blistering report by state auditors.

"My concern is that we get too complacent. We recognize things are getting better, but we forget there are people out there who are still hurting," Herbert said.

Cooke slammed Herbert for taking in $1 million at his annual Governor's Gala fundraiser last weekend, saying the event "just rubs it in the face of the people of this state."

The retired general said he was frustrated by what he described as Herbert's lack of participation in public forums around the state. The governor agreed to three debates, fewer than Cooke sought.

"You can probably feel the frustration in my voice today," Cooke said.

Herbert said he felt the number of debates was appropriate.

The governor told reporters after his news conference that he was endorsing former Salt Lake County Councilman Mark Crockett, a Republican, over Democratic Rep. Ben Madams.

"I like both candidates," Herbert said. "But I'm a Republican governor, and I'm endorsing the Republican candidate."