SALT LAKE CITY — An article published by a national news outlet Tuesday is challenging a central element of Mia Love's family's immigration story — a story she says led her to becoming a GOP Congressional candidate.

At the Republican National Convention last month, Love described her upbringing to an enthusiastic crowd.

"My parents immigrated to this country with $10 in their pockets and a hope that the America they heard about really did exist," she said during the Aug. 28 speech.

Now that story is under scrutiny with a Mother Jones story with the headline "GOP Rising Star Mia Love: anchor baby?"

It's an incredibly reckless statement to make. I didn't have anything to do with this. I think it's ridiculous that she's saying those things.

The Mother Jones piece zeroes in on a January 2011 Deseret News column, in which she told Lee Benson, a '70s-era immigration law would grant Love's entire family citizenship if her Haitian-born parents had a baby in the United States before Jan. 1, 1976.

The column says Love was born 25 days before that and quotes Love as saying: "My parents have always told me I was a miracle and our family's ticket to America."

Mother Jones could find no evidence of any such law.

Now she says her parents came on a tourism visa and later became citizens and did everything by the book.

"They established a life, made sure my parents had work and a home, and then brought my brother and sister over," Love said.

Tuesday morning on KSL Radio's "The Doug Wright Show," Love accused her Democratic opponent Jim Matheson of somehow being behind the report. 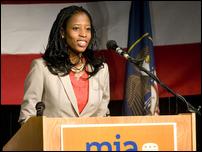 "It is so sad that Jim Matheson and his friends would go as far as attacking my family, attacking the American Dream," Love said.

"I think it was an incredibly reckless thing to say," Matheson told KSL News. "It's completely not true, and there just shouldn't be room for that in politics."

Later, Love toned down the accusation.

"I think I pose a threat to Jim Matheson, Barack Obama and the liberal agenda; and this is one way to try and attack me," she said.

"I've received a lot of racial material in my city office," she said, "and that's being handled by law enforcement."