OGDEN — Ogden officer Kasey Burrell, one of six officers shot this month in a marijuana drug raid on Jackson Avenue, was released Sunday from McKay-Dee Hospital after three weeks of medical care.

Burrell and several of the other wounded officers were members of the Weber-Morgan Narcotics Strike Force and serving a knock-and-announce warrant at Mathew Davis Stewart's home at 3268 Jackson Ave., when gunshots erupted. 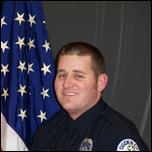 Last summer, Matthew David Stewart told a friend that if police officers ever tried to stop his marijuana cultivation, he'd "go out in a blaze of glory and shoot to kill."

Stewart, 37, was hit in the exchange of gunfire and remains hospitalized at Ogden Regional Medical Center.

He has been charged with one count of aggravated murder, seven counts of attempted aggravated murder and one second-degree felony count of production of a controlled substance. The Weber County Attorney's Office has said it will seek the death penalty.

Officers were at Stewart's home that evening attempting to gain evidence supporting reports that he had an extensive hydroponic grow operation for marijuana.

In the aftermath of the shooting, several items were removed from the home in support of such an operation, police say, including PVC pipes and heat lamps.

In a statement released by Burrell's family, they said they appreciated the love and support shown to them during the ordeal, and asked for privacy.