OGDEN — The Weber-Morgan Narcotics Strike Force, which saw nearly half its agents felled by gunfire in a drug raid Wednesday night, had a humble start back in 1988.

It was 24 years ago this month that a Byrne Grant of a mere $85,000 established the multi-police agency entity, a unique animal because of the strings the grant brought.

"The requirement was that one large police department didn't take all the money and ignore the others," said Kelly Call, a former state narcotics officer who wrote the grant establishing the strike force.

The money, nominal as it was, had to be used for "buy" money for drugs and equipment and not funneled to any particular agency, Call said. 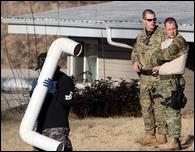 The Wednesday night shootout that injured five officers and took the life of Agent Jared Francom brings to light a startling example of the dangers narcotics officers face.

Police departments throughout Weber and Morgan counties were assured say-so in the entity with either the "donation" of an officer to work drugs full-time or by handing over money to keep the operation going.

"We were geared toward street-level interdiction. The DEA did their thing, but there was no real street level enforcement then. These task forces were to go after street level dealers nobody was messing with because they didn't have the funding or the resources."

It made sense, Call said, because street crime was spiking out of control due to illicit drugs.

"Drugs have no borders. They don't have boundaries and this way, we could go anywhere we wanted."

Call, as a state narcotics agent, headed up the strike force, which culled officers from multiple, disparate police departments — agencies not without some history of turf battles that stretched beyond competitiveness and delved into downright distrust.

"It was really hard tearing down the boundaries, getting the guys to trust one another. The talking back and forth, trading information, was not easily done."

Over time and after some bumps, Call said he began to see a transformation among the officers.

"Once they could see they were doing it for the good of the people and there were no boundaries when it came to drugs, we ended up a really cohesive team…It was a hard start, but once it got going it just went crazy."

Call stayed on for 18 months and turned the reins from the state over to Weber County as the administrating agency.

Ogden Police, with a larger, more city-centric department than Weber County, pushed in more manpower, while smaller agencies such as Roy, Riverdale and South Ogden started to send an officer up.

Officers rotated in on 18-month assignments from their respective agencies and seldom stayed beyond two or three years.

"It wasn't a place where they could bury somebody or hide somebody," Call said. "The idea is that they took that knowledge and went back to their departments to use it."

That specialized experience that comes from working the strike force can confront even a relatively seasoned patrol officer with new challenges like writing a search warrant, running a confidential informant or even going undercover to buy drugs.

Each time former Riverdale Police Chief Wayne Hoaldridge sent an officer up the strike force, he said he'd get one back who was a little bit changed.

Like some say, you can leave the strike force, but it never leaves you.

"Each one came back a better officer: better with search warrants, better with investigations, those kinds of things. They would set themselves up to be a supervisor."

Hoaldridge, now retired, took over as Riverdale's police chief in 1991, supervising a small department that had the benefit of a large tax base, but a small residential population.

His officers may have had the luxury of some of the best equipment around because of the city's healthy sales tax revenue, but the department was small and bogged down with the hellish traffic problems on Riverdale Road and an endless stream of property crimes.

Each one came back a better officer: better with search warrants, better with investigations, those kinds of things. They would set themselves up to be a supervisor.

"We had our drug issues. People doing drugs, selling drugs, going in and coming out in the motels and you are locked into your patrol answering calls and working traffic," Hoaldridge said. "We did not have a big detective group, no real time to work drugs. We did not have the serious ability to do it the right way."

The strike force, he said, became the answer.

"The communities it really benefited are ones like Riverdale."

Retired Roy Police Capt. Doug Gard was with Call's original crew. With just four years under his belt as an officer, he recalls being thrust into a brand new, scary law enforcement world that was being tested on the streets of Weber County for the first time.

"The only agency doing anything at that time with narcotics was Ogden and nobody was doing hand-to-hand buys...I remember writing things down on the palm of my hand to make sure I was getting it right. Thank God Kelly (Call) knew what he was doing."

Gard said the strike force operation was so scant with equipment, officers were swiping pencils and borrowing desks.

Like Hoaldridge, Gard said the unique nature of the strike force made officers work together, and by pooling resources, they were able to more effectively deal with the narcotics problem.

"It made cities work together. We knew we had a drug problem, but the agencies were small enough back then that nobody could do it by themselves."

Gard finished his stint and made sergeant. He said one of the biggest challenges of being in the strike force is what happens when you're not.

"Everything you're handling up there is a felony," he said. "And you go back and look around and think, 'You want me to write traffic tickets?"

And he said whatever you think you know as an officer when you go up to the strike force quickly becomes overshadowed by realizing what you don't know.

"If you're not grown up coming out of the strike force, then there's something wrong. We were all scared to death back then, but it is ten times worse now."