OGDEN — Last summer, Matthew David Stewart told a friend that if police officers ever tried to stop his marijuana cultivation, he'd "go out in a blaze of glory and shoot to kill."

The Weber County Attorney's Office says it will seek the death penalty against Stewart if he is convicted.

In addition to Francom, Stewart shot officers Shawn Grogan and Kasey Burrell at close range "from a concealed position" with a Beretta 9mm semi-automatic pistol, according to an arrest warrant affidavit.

The officers entered the home with a search warrant after loudly announcing several times, "Police, search warrant," court documents state. The officers had received information that Stewart was growing marijuana. Investigators later found a marijuana grow operation in the basement, including artificial lighting and a water system.

After the officers entered the home and cleared the basement and the main floor, they continued to announce their presence with no response as they went through the house. Stewart surprised the group and allegedly started shooting.

Grogan was struck in the face and fell to the floor.

Ogden police officer Michael Rounkles was shot twice after he arrived as backup and entered the house to help the wounded officers.

Even after the officers had left the house, Stewart went to the door and continued firing "into the street and front yard at the already wounded agents and fellow agents who were trying to evacuate them," prosecutors said.

Stewart ran to a shed in his backyard and continued to fire at officers before giving up and surrendering after he had been shot, according to police sources. 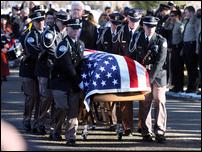 VanderWarf was treated that night at Ogden Regional Medical Center and was later released. Hutchinson was treated at McKay-Dee Hospital Center and has since been released. Grogan was released from the hospital just prior to Francom's funeral on Wednesday. Burrell and Rounkles were the most seriously injured. Burell, a seven-year veteran of the force, and Rounkles, a four- year member of the department, were both listed in fair condition on Friday.

Stewart remained at Ogden Regional Medical Center Friday, reportedly in a condition that was not life- threatening, after being shot by police. He is under guard. Once he is released, he will immediately be booked into jail.

"I've seen him. He's able to talk, but that would be the extent of it. He's still in a hospital bed," Richards said.

He could not talk about his client's injuries and did not know how much longer he might be hospitalized.

Written by Pat Reavy with contributions from Emiley Morgan