SALT LAKE CITY -- It's a story that's captured the headlines of nearly every news outlet in the world: Utahns leaping into the frigid waters of Logan River to save three children trapped in a sinking car. It's been the subject of nearly a thousand articles on Google News.

Tuesday, the Today show shared the story of a rescuer who fired his gun in order to free the children trapped inside the car.

It was a moment where seconds made the difference between life and death and a moment Chris Willden will never forget.

"I can't say why people did what they did, I just know there were kids in harm's way and a lot of volunteers came out of the woodwork to help get those kids out of the river," Willden said.

Roger Andersen's car ended up in the Logan River on Saturday, the result of an icy road and a dangerous area of the canyon.

I can't say why people did what they did, I just know there were kids in harm's way and a lot of volunteers came out of the woodwork to help get those kids out of the river.

"I tapped the breaks once and that one tap is really all that it took," Andersen said in press conference Monday.

Roger Andersen's car traveled down a 10 foot embankment and then flipped into the icy river.

Andersen was able to free himself as the frigid water began pouring into the car. His 4-year-old son Baylor, his 9-year-old daughter Mia and her 9-year-old friend Kenya however, were trapped inside, with the water rising.

Suddenly, Willden and a handful of other passersbys were by his side.

"Within five seconds there were eight men in the river, three to four feet deep water, ready to assist and help in any way," Andersen said.

Unable to open the doors and get the children out, Willden pulled out his gun, held it next to the window and fired. 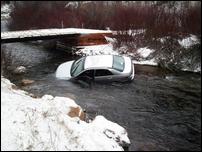 The area of Logan Canyon that was site of a crash and dramatic rescue New Year's Eve apparently has had its share of problems.

"I pushed the firearm as far down into the riverbed as I could and up against the window," Willden said on the Today show.

"When it stopped, I knew it was at the top of the window where the door frame and window joined, angled it more strait up and down and figured if the bullet went through the window it would only have to travel two maybe three inches before it would lodge up inside the roof of the vehicle."

The former police officer said he's shot handguns under the water before and knew the children wouldn't be harmed.

"I had a good idea on the trajectory, what the bullet would do from that caliber," Willden said.

After breaking the window, and still unable to free the children, those in the water flipped the car back over and Willden used his knife to cut their seat belts.

Willden's father Bruce said it wasn't until the children were free that he realized so many people had risked their lives to save three precious ones.

"The people taking the children up onto the bank and wrapping them in blankets and coats and placing them in warm vehicles - it was just a surreal situation. We're just grateful it turned out the way it did," he said.