The strongest winds were reported near Centerville, where gusts of 102 mph, 100 mph and 86 mph were recorded by the National Weather Service. A 100 mph wind gust is the same as a Category 2 hurricane.

In Bountiful, which has its own power company, 40 percent of homes still were without power at 9 p.m. Crews from Logan, Murray and Provo came to the city's aide, but are expected to stop for the night and resume working at 7 a.m.

"When we lost our two lines, we lost the entire city," said city manager Tom Hardy. "We had nobody in the city in power."

All Davis County schools will be closed Friday as a result of the storm. Thursday began with all schools in the district open. By the end of the day, 28 were closed because of storm-related issues. In addition, windows in 30 buses were shattered.

District officials will use Friday to assess damages and begin making repairs so schools and the full bus fleet can be operational Monday.

"Our main focus is to make sure that our students and employees are safe," Superintendent W. Bryan Bowles said. "We know families have been affected by this storm, not only students who go to schools, but also staff members who work in our schools."

In South Weber, the wind created a dicey situation at South Weber Elementary, where wind toppled a telephone pole and power transformer onto a chain-link fence that surrounds the school and a city park.

City and county law enforcement officials had to make sure students knew to stay clear of the fencing, which they assume is electrified. All students had escorts to buses or their parents' cars after school ended.

Strong winds down trees and power lines in West

Some of the worst winds in years blasted the West overnight, knocking down trees and power lines in California and toppling trucks and forcing some schools to close as gusts reached 102 mph in Utah.

Extensive damage was reported throughout Davis County. South Davis Metro Fire Chief Jim Rampton said at least three house fires were caused by downed power lines. One of the homes, near 200 East and 1500 South in Bountiful, was a complete loss, he said. No one was in the house at the time of the fire.

Rampton said his crews responded to at least 10 semis that were blown over, numerous fuel spills due to the overturned vehicles and a number of natural gas line breaks caused by uprooted trees.

Sen. Orrin Hatch, R-Utah, issued a statement Thursday evening, saying he had contacted the Federal Emergency Management Agency and asked the agency to monitor assistance for Utahns impacted by the storm.

"I want to extend my compassion to Utahns who have been impacted by today's significant wind storm," Hatch said. "It is always disheartening to witness the havoc Mother Nature can wreak on buildings, homes, cars and other personal belongings, and my heart goes out to those who now face major repairs and structural damage."

"My garage door caved in like a paper hat," he said. "It just was amazing. One big gust, and it just takes it off the rails and ruins your car. My neighbor's trailer was end over end. These are powerful winds."

The wind had died down in Davis County by Thursday afternoon, and residents and crews began the cleanup and damage assessment that could take several days. 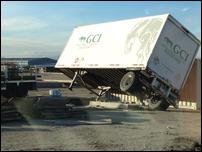 High winds slowed and even stopped transportation in parts of Davis County Thursday.

The Utah chapter of the American Red Cross opened reception centers in Bountiful, Centerville, Clearfield and Ogden on Thursday evening for those affected by the high winds and power outages.

There were so many reports of downed trees, power lines and freeway road signs in Davis County that police asked residents to be patient and not to flood the 911 system unless they truly had an emergency.

Bountiful police also encouraged residents in Bountiful, North Salt Lake and Woods Cross to stay off the roads and not travel if it wasn't necessary.

FrontRunner trains were brought to a halt between Layton and Woods Cross because of debris. The Utah Transit Authority reported its Farmington station sustained heavy damage due to high winds.

About 15 light poles were blown over at the Farmington station, some onto the tracks, as well as roofing from the pedestrian bridge at the station, said UTA spokesman Gerry Carpenter.

A bus bridge was set up between the affected stations for most of Thursday. By 3 p.m., the debris had been cleared from the tracks and FrontRunner was fully operational again.

In Centerville, where city officials declared a state of emergency, several motorists were pelted on Parrish Lane with debris from damaged buildings and signs.

"I thought a bomb went off in my car," Riley Bergseng said. "It was loud, and I was impacted by a bunch of tempered glass. … I was trying to stay in control. I slowed down, and I saw an exit and boogied off."

Motorist Cory Christian said a rock was flung through his window and hit him in the eye.

"I didn't even know what to think, and the explosion was so loud I couldn't hear," Christian said. "It blew up by my ear, and I couldn't even think."

Centerville spokesman Cory Snyder said police were aware of widespread and significant problems being caused by the wind as early as 5 a.m. By 7 a.m., the city had activated its emergency operations center.

A declaration of emergency was called as a result of traffic concerns and a citywide power outage. None of the traffic signals were working, and stop signs were blown over, Snyder said.

"It made travel difficult and potentially dangerous," he said.

Centerville also activated its reverse 911 system, an automated telephonic system that alerted residents that all schools would be closed.

The city was forced to use a backup power system for its water supply. The emergency declaration allows the city to tap a variety of interlocal agreements with surrounding agencies, if need be, and is the first step for the city to receive any financial support.

Multiple staging areas were set up at parks and churches throughout the city for the collection of green waste debris, such as fallen trees and twigs, Snyder said.

"We're just lucky we don't have tornadoes here," Mudrow said. "What's a few trees compared to looking at the foundation of your home and saying, 'Hey, I used to live here?'"

In Kaysville, wind decimated what is known locally as "Evergreen Strip," where more than a dozen Colorado blue spruce trees were blown over.

"It's devastating," said Sackett, who is in charge of doing an inventory of the city's trees.

Kaysville, with its towering ancient pines, is a designated Tree City USA city. Each of its large trees is worth between $8,000 to $10,000, Sackett said.

Down the street, the wind uprooted the 80-foot Christmas tree at City Hall.

In Layton, high winds created widespread damage. The fencing at Burch's Trees on Main Street was toppled. The Christmas tree lot is a holiday tradition in the city. The wind knocked the canopy into a trailer in the lot.

Layton fire prevention specialist Doug Bitton braved the wind in the middle of Fairfield Road, directing traffic around a power line that was threatening to come down.

"We got a lot of hands on deck today," Bitton said, adding that emergency responders were overwhelmed by downed power lines and blown transformers.

Farther east, wind-caused damage to a home on Gordon Avenue was attracting a crowd. Two 50-year-old Japanese pine trees succumbed to the wind and toppled onto the house. Their extensive root systems peeled up a section of the driveway and caused damage to the sidewalk.

The homeowners, Shan and Sandra Stott, were in good spirits despite being unable to get out of their front door. Their shiny black Infiniti also was covered by a pine tree.

"I wish the wind would have taken out the walnut tree," Sandra Stott said, adding that she had been asking her husband to remove it for years.

Shan Scott said they were unaware of the mayhem in their front yard until somebody pounded on their door at 7 a.m.

"One tree was already gone," he said. "And I watched the other one come down."

Stott said he built the home 50 years ago and planted both trees when they were tiny saplings. As he spoke, the wind whipped at a rose covered trellis, and he grimly predicted it would be the next to go.

"I'll have to replace that too," he said with a sigh. "You start talking about these things, and everything costs money."

In Bountiful, city officials said it could take two days to clear roadways of debris. They also announced that the Bountiful Landfill would be open free of charge for residents to dispose of debris.

In Fruit Heights, the steeple on the Westminster Presbyterian Church was blown off the roof.

The Davis County Sheriff's Office was also hit significantly with power problems and worked most of Thursday using a backup generator. Half of the 800 MHz antennas officers use to communicate with dispatch and each other were knocked out, creating "big radio problems," according to the sheriff's office.

All cases at the Farmington Courthouse were canceled for the day Thursday. Hill Air Force Base grounded all of its jets because of high winds.

Two of the students were blown over in a parking lot on the east side of the campus and sustained minor injuries.

Another student was hit by a blowing door near the Kimball Visual Art Center. That student may have been taken to local hospital as a precaution, Kowalewski said.

Flying debris caused a fair amount of property damage to the campus, he said. Daytime classes were canceled at both the Ogden and Davis County campuses. WSU's Davis campus also will be closed Friday.

Municipal crews, deployed citywide at 6 a.m. Thursday, worked throughout the day to address storm-related public safety issues and clear roads, sidewalks and other public right-of-ways. All major right-of-ways were expected to be cleared by Thursday evening.

"While some sidewalks may remain blocked until tomorrow, our crews have done an outstanding job in clearing streets," said Rick Graham, the city's public services director. "City traffic should currently be moving without hindrance from storm-related debris.”

Graham said the full impact of the storm damage was still being assessed, but some 30 trees were downed at the City Cemetery, seven at Sunnyside Park and a large tree had fallen at Gilgal Gardens, but no statuary at the park was damaged.