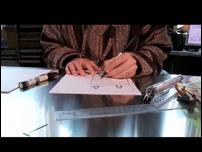 Viz arts faculty storyboards for "Where the Wild Things Are"

The logo, or "doodle" in the colloquial, on the Google search engine's homepage is often altered to reflect and commemorate "holidays, anniversaries, and the lives of famous artists and scientists," according to the Doodle 4 Google history web page, and ""illustrates the creative and innovative personality of the company itself."

Many of these doodles come from Google's team of designers, while others are submitted by fans of the doodle. Some though, like in Woodward's experience, are the product of Google approaching artists they feel are a good fit for a specific illustration.

"Someone on the Google team was familiar with my previous work, particularly my short film that was a contemporary animated dance piece," Woodward said. "When they saw that, they just felt I was a really good for the Martha Graham doodle."

The choice couldn't have been more convenient for the BYU professor either. Google offered to fly him out to New York City to film the Martha Graham Dance Company, a dance company based on Graham's revolutionary contributions, but when he got off the phone, an alternative came into view.

"I hung up the phone and then turned around. Behind me was a poster saying that the Martha Graham Dance Company would be at BYU in two weeks."

For the 12-second animation, Woodward drew about 300 frames of a dance choreographed by members of the Martha Graham Dance Company. The completed dance was then filmed on BYU campus for Woodward, who then animated the dance, a method similar to that used for the short film "Thought of You" that got him noticed by Google.

"It was really quite essential to work with actual, live dancers. I'm not a dancer, I appreciate it, I'm a fan of dance, but not a dancer. They got the movements and choreography just right," said Woodward.

"To actually put together something that they felt kept the integrity of the piece was really quite rewarding."

Martha Graham choreographed over 180 works, including solos, ballets, and large-scale works. Her groundbreaking additions to modern dance have had a heavy influence in modern contemporary dance, and many of her iconic works were referenced in the dance choreographed for the doodle.